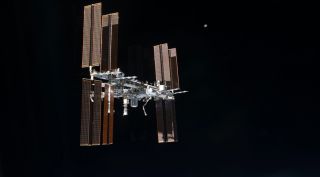 A House bill introduced Sept. 26 would authorize an extension of the ISS to 2030 amid concerns of a gap in NASA's presence in low Earth orbit.
(Image: © NASA)

WASHINGTON — A key House member announced Sept. 26 that he is introducing legislation that would extend operations of the International Space Station to 2030, weeks after senators sought a similar extension.

In his opening statement at a House space subcommittee hearing on the past and future of NASA's space exploration efforts, Rep. Brian Babin (R-Texas), chairman of the subcommittee, said he was introducing legislation called the Leading Human Spaceflight Act that he said was designed to "provide further congressional direction to NASA."

The text of the bill, designated H.R. 6910, was not immediately available. However, Babin said in his remarks that one provision of the bill would extend the existing authorization for operating the ISS from 2024 to 2030 unless a viable and less expensive commercial alternative was available sooner. [How Will the International Space Station to Earth?]

"As I've said before, the ISS is the crown jewel of America's human spaceflight program," he said. "Leadership in [low Earth orbit] returns tremendous economic benefits of space exploration to Earth."

During the hearing, Babin asked the witnesses, which included NASA Associate Administrator for Human Exploration and Operations Bill Gerstenmaier and directors of three NASA field centers, what the agency was doing to prevent "another detrimental capability gap" through its ISS transition efforts.

Gerstenmaier referred to a NASA ISS transition plan published earlier this year. "We treat that very seriously," he said, citing studies awarded in August to a dozen companies to look at commercial opportunities. "We're going to see what industry is interested in and what they can provide, and therefore we'll build a smooth transition so we don't have an abrupt end of one program and then start another program."

The proposed extension of the ISS to 2030 in the House bill mirrors language in the Space Frontier Act introduced in the Senate in July. That bill was approved by the Senate Commerce Committee Aug. 1 and awaits action by the full Senate.

In a simultaneous hearing by the Senate space subcommittee, Sen. Ted Cruz (R-Texas), chairman of the subcommittee and lead sponsor of the Space Frontier Act, reiterated his desire to extend the ISS. "American taxpayers have invested over $100 billion in the ISS, and it is important that we maximize the return on taxpayers' investment," he said in his opening remarks.

Cruz also played up the geopolitical angle, noting Chinese plans to establish its first permanently crewed space station in low Earth orbit by 2022. "We cannot cede low Earth orbit to China, or to any other nation," he said. "The United States government must consider having a permanent human presence in low Earth orbit, which may require a government station after the ISS reaches the end of its useful operation."

Cruz later asked his hearing's only witness, NASA Administrator Jim Bridenstine, about his concerns NASA seeks to abandon the ISS in 2024, leaving China with the only operating space station. "To be perfectly clear," Bridenstine responded, "there is no plan to deorbit the International Space Station."

Bridenstine emphasized NASA's plans to transition operations in low Earth orbit to the commercial sector, which he argued would result in technological innovations and reduced costs. He said there are companies interested in establishing "consortia" that could operate the ISS commercially.

Bridenstine, in a Sept. 24 interview at a Washington Space Business Roundtable luncheon, noted an extension of the ISS would have an impact on NASA's other exploration initiatives given the agency's projected budgets. "We can extend the International Space Station, and if Congress wants to give us a lot more money, we'll take it," he said. "But the reality is, given our current budget constraints, if we want to go to the moon and we want to go to Mars, we need to commercialize low Earth orbit and go on to the next step."