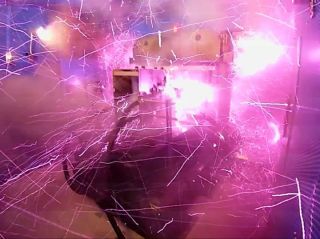 Sparks flew when the Takeyama Lab magnet turned on in a recent experiment.
(Image: © Shojiro Takeyama)

There's a magnet in a secure room in central Tokyo. It's an electromagnet, the kind that generates a magnetic field when electrical current flows through it. The last time the scientists who operate it switched it on, it blew open the heavy doors designed to keep it contained. Already, it has created one of the most intense magnetic fields ever generated on Earth. And it keeps getting more powerful.

The magnetic field, which recently reached a strength of 1,200 teslas — a unit of magnetic intensity — was described in a paper published Sept. 17 in the journal Review of Scientific Instruments.

Twelve hundred teslas is an enormous measurement. The most powerful magnet most people have any chance of encountering in their lifetime is inside an MRI machine — and the most advanced, powerful, sometimes dangerous MRIs in the world clock in at just 3 teslas. In 2004, Popular Mechanics magazine described a machine billed as "the world's most powerful magnet" — meaning the most powerful magnet that doesn't tear itself to bits whenever it's turned on — and it emitted just 45 teslas. That's less than 4 percent of the power emitted by the magnet created by lead author Shojiro Takeyama and his colleagues.

And crossing the 1,000-tesla mark is a major milestone in an engineering effort that Takeyama said dated back to the 1970s, and which he has led for the last two decades.

To achieve that intensity, Takeyama and his team pump megajoules of energy into a small, precisely engineered electromagnetic coil, the inner lining of which then collapses on itself at Mach 15 — that's more than 3 miles per second (5 kilometers per second). As it collapses, the magnetic field inside gets squeezed into a tighter and tighter space, until its force peaks at a tesla reading unimaginable in conventional magnets. Fragments of a second later, the coil collapses entirely, destroying itself. [Mad Geniuses: 10 Odd Tales About Famous Scientists]

The 1,200-tesla experiment required 3.2 megajoules of energy. But Takeyama, a physicist at the University of Tokyo, told Live Science that he believes his device can reach 1,800 teslas if he and his team apply 5 megajoules to it. (They're taking their time getting to that point, he said, partly due to safety concerns.)

"The most similar magnetic-field generation is by chemical explosives," Takeyama said, referring to experiments beginning in the 1960s and continuing until 2001, in which Russian and American researchers detonated explosives around electromagnets in order to squish them, briefly creating very powerful magnetic fields — up to 2,800 teslas.

"They cannot conduct these experiments in indoor laboratories, so they usually conduct everything in the outdoors, like Siberia in a field or somewhere in a very wide place at Los Alamos [New Mexico]," he said. "And they try to make a scientific measurement, but because of these conditions it's very hard to make precise measurements."

Other forms of superstrong magnetic fields require lasers, but Takeyama said that the laser-generated fields are tiny and supershort-lived, even by physics standards, making them similarly problematic for the sorts of experiments in which he and his laboratory colleagues at the University of Tokyo are interested.

The point of building a magnet in the 1,000-plus tesla range, Takeyama said, is to study hidden physical properties of electrons that are invisible under normal circumstances. He and his team will put different materials inside their magnet to study how their electrons behave.

Under those extreme conditions, he said, conventional models of electrons break down. Takeyama doesn't know exactly what happens to electrons in such extreme situations, but said that studying them in the moments before the coil's self-destruction should reveal properties of electrons normally invisible to science. Extremely powerful magnetic fields also have possible applications in fusion engineering, to keep the hot plasmas of a fusion reaction contained and far from their container walls.

The problem with building magnetic fields that powerful is that, as in the case of Takeyama's magnet, they almost, by definition, destroy themselves within moments of their creation. The field — and the process of creating it — inevitably exerts so much energy on the device generating it that at least some element of the device burns out or collapses on itself. Takeyama said that the advantage of his magnetic field is that it's relatively robust compared with fields generated by lasers or explosive devices. It's large enough to contain a substantial amount of material, requires no explosives and has a life span of a few dozen microseconds (millionths of a second). That's short in human terms, but it lasts several times longer than those laser-generated fields. [Top 10 Greatest Explosions Ever]

Also, while the coil itself is destroyed, the surrounding machine survives the process largely intact.

Here's what happened when it was powered up to 3.2 megajoules for the experiment that produced the 1,200-tesla field:

The device is contained and nondestructive compared with those explosive experiments in Siberia and Los Alamos. But still, every time the magnet is used, Takeyama and his team must enter the room and begin the long, laborious process of cleanup and repairs, he said. His research team must fabricate a new magnetic coil to exquisitely precise dimensions for each use. The typical wait time between experiments, he said, is about two to five months.

Outside researchers interested in elusive fusion-power generators have expressed interest in Takeyama's research as possibly useful for their large, magnetic plasma containment systems, he said. However, he said he's not certain how useful his fields might be in that context, nor is that his primary goal.

Down the road, he said, he expects to amp up the power on his machine, eventually maxing it out at the 5-megajoule, 1,800-tesla mark. But he's in no rush to get to that point, he said. First, he and his team want to explore as much as possible what they can learn at the 3.2-megajoule, 1,200-tesla range. And there remains the problem of safety as the energies involved increase.

For now, he said, his team has added some stronger doors to his lab.