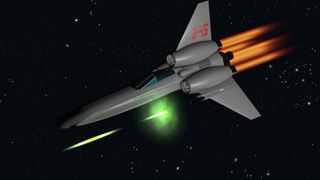 The U.S. wants a 'Space Force' to be the sixth branch of the U.S. military.
(Image: © Carlos Romero/Shutterstock)

United States Vice President Mike Pence has confirmed overnight plans to create a "Space Force" as the sixth branch of the U.S. military.

He repeated comments from President Donald Trump, who had said that "American dominance in space" was imperative.

These are deeply concerning sentiments coming from (arguably) the most powerful men on Earth. They risk irrevocably skewing the conversation about space away from what it is, to something it should not be, thus distorting the reality of what space largely represents.

Of course space is strategic, and has always been so – but perhaps in different ways depending on one's perspective.

Our dependency on space assets has been driven both by the growth of the commercialisation of outer space, but also its increasingly important security and military significance.

As regards the latter, space has in the past been characterised many times as "congested, contested, and competitive." It's a description put forward by analysts and (primarily) military commentators who then go on to postulate that war in space is inevitable.

No doubt there are concerns about the impacts of compromised satellite networks on terrestrial military and security activities. But after all that space gives us in terms of improving the lives of so many people, is that to be its defining feature – as a platform for military conduct?

I offer a different perception of the strategic implications of space – one that is equally plausible and much more in accordance with existing law and practice.

While space is competitive, complex and challenging, it is also many other things. It is cooperative, collaborative, collective, and commercial. These are equally important strategic considerations for the whole of humanity, let alone for Australia.

Undoubtedly space is increasingly a dual-use area - where satellites at the same time offer commercial services to civil and military customers. This raises some interesting questions about the possible classification of certain satellites as legitimate targets of war.

But blithe assertions about the inevitability of war in space risk becoming self-fulfilling and self-defeating prophecies.

They represent an increasingly loud voice that threatens to drown out other, more rational ones. They ignore the uniqueness of the space domain and the peaceful purposes and common interest doctrines that underpin it.

A threat of an arms race in space

The fear is that rhetoric like that coming from those raising the inevitability of space war will fuel a race to the bottom, as all major (space) powers dedicate even more energy towards an arms race in space.

This also gives rise to the creeping colonisation of space around claims regarding resource exploitation and possible attempts by countries to establish systems to protect themselves against their vulnerabilities by denying access to space for others.

To ignore this and simply to try to argue that the legal framework supposedly supports war in space relies on an overly simplistic assertion that what is not expressly prohibited (by the treaties and international law) is permitted.

It is crucial that the underlying principles of space law and the practice of States in interpreting those principles continue to apply to preserve space for the "benefit and in the interests of all countries." This is specified in the Outer Space Treaty, to which virtually all space-faring nations, including the major powers, are bound.

The international rules that govern space dictate responsible behaviour, freedom of access but not lawlessness, and an adherence to well-established international principles and norms of behaviour that serve us well.

Properly respected, these allow for and encourage inspiration and optimism, innovation and development, commerce and science, notwithstanding the pressures of increasing commercialisation.

A militaristic view of space threatens the existing legal regime and can thwart the opportunities for all of us.

The humanity of space

In the end, we must not lose sight of the humanity of space and the need to use it for peaceful purposes underpins our very future. The existing rules recognise and reinforce these imperatives.

Read more: How to grow crops on Mars if we are to live on the red planet

Thinking of space as a place to conduct war, dangerously jolts the conversation about space and gives rise to consequences that are too terrifying to contemplate. Asserting the inevitability of war in space simply argues that we should move down that untenable path.

Every effort must be made by all sectors of society to recalibrate those conversations. The countervailing voices must be heard. There are so many positive aspects to how space should be viewed. This is supported by law and practice.

Ironically, a good starting point could also be drawn from the words of President Trump himself:

Let's ensure that we keep it that way and avoid making the same horrible mistakes that we have made here on Earth.