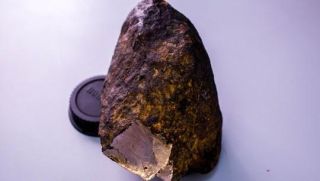 Gold hunters in southern Russia might have been disappointed to learn that the speckled, yellow rock they uncovered was not a sizeable pebble of valuable metal. Instead, it was a rare piece of space-borne rubble containing a new mineral that had never before been seen on Earth.

The mineral came from the Uakit meteorite, named for the Russian location where it was found. Scientists recently presented their discovery of the meteorite's new mineral, named uakitite, at the Annual Meeting of the Meteoritical Society in Moscow.

The researchers found that more than 98 percent of the meteorite consists of kamacite, an alloy of iron and 5 to 10 percent nickel, that's formed in space and is found only in meteorites, which are rocks that fall from space to Earth's surface. The remaining 1 to 2 percent of the meteorite consists of just over a dozen minerals that, for the most part, are exclusively formed in space. On top of that, the composition of the extraordinary space rock suggests that it must have formed under brutally hot temperatures, well over 1,800 degrees Fahrenheit (1,000 degrees Celsius), the researchers said. [Fallen Stars: A Gallery of Famous Meteorites]

The team examined the meteorite with powerful microscopes and identified uakitite as tiny grains no bigger than 5 micrometers — about 25 times smaller than a fine grain of sand. The new mineral is so tiny that the scientists couldn't piece together all its physical properties.

But they were able to determine that the mineral is structurally similar to two other space-borne minerals, carlsbergite and osbornite. These minerals are referred to as mononitrides because they contain a single nitrogen atom in their chemical formula.

Mononitrides are very hard and are sometimes used as abrasive material, said Victor Sharygin, a geologist at the Institute of Geology and Mineralogy in Novosibirsk, Russia, and lead researcher on the discovery of uakitite.

A few news publications have reported that uakitite is harder than a diamond, but Sharygin said that's not the case. In fact, he said, "the hardness of uakitite was not measured directly," because the grains were too small. Instead, the scientists estimated the hardness using synthetically produced vanadium nitride, a mineral that closely resembles uakitite.

The researchers predicted that uakitite is between 9 and 10 on the Mohs hardness scale, meaning it's very hard — a diamond falls at 10. But Sharygin explained that the Mohs scale has a wide range between 9 and 10. All mononitrides fall at this end of the scale, he said, "but their hardness is lower than [that of] a diamond."

Sharygin said that synthetic boron nitride, another mineral produced at insanely hot temperatures, is likely the only mineral that comes close to being as hard as a diamond.