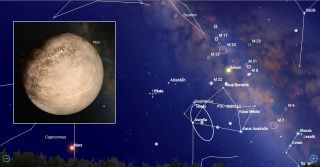 This summer, slow-moving Pluto is located relatively low in the southern evening sky near the teapot-shaped constellation of Sagittarius. Pluto is located about midway between bright red Mars and dimmer, yellow Saturn, a few degrees above the imaginary line connecting the two bright planets. While Pluto is a challenging object to see, a large-aperture telescope and dark-sky conditions, make it possible, if you know where to look.
(Image: © SkySafari App )

This week, the small and distant dwarf planet Pluto will reach opposition, the time of the year when the object is closest to Earth and brightest in the sky. As a happy coincidence, the moon will be near its new phase, leaving our skies plenty dark for hunting the challenging dwarf planet in large telescopes. In this edition of Mobile Astronomy, we'll show you how to find Pluto and perhaps even see it for yourself. We'll also fly you out to Pluto and watch the Earth and moon cross the sun's disk in a rare planetary alignment.

Pluto takes 248 years to orbit the sun. But once every Earth year, our planet's faster motion carries us between the sun and Pluto, a phenomenon that astronomers call opposition.

When a planet is at opposition, it will rise as the sun sets and spend all night crossing the night sky. It's the best time to observe the planet, because it will always shine at its brightest and show a completely illuminated face with the largest apparent-disk diameter as viewed from Earth during the year. This is because the distance between Earth and the planet is at a minimum. (Everyone is looking forward to Mars' opposition later this month!) [Pluto and Charon Shine in Most Detailed Topographical Maps Ever]

On Thursday, July 12, Pluto will reach opposition for 2018. On that date, Pluto will be the closest to Earth (3.03 billion miles, 4.87 billion kilometers, or 271 light-minutes) and brightest (visual magnitude +14.2) for 2018. Because the moon will be near its new moon phase, and out of the evening sky, conditions will be optimal for spotting this challenging target in telescopes.

The dwarf planet will be near its best for several days on either side of July 12, so don't worry if you have cloudy skies on opposition night.

Finding Pluto in the sky

Pluto is small and distant, making it tough to see without the right equipment and sky conditions. Its diameter is only 1,473 miles (2370 km), or just 19 percent of Earth's diameter. The dwarf planet's distance from the sun ranges between 29.6 and 49.4 AU (an AU, or Astronomical Unit, is the mean sun-Earth separation), so Pluto varies in brightness between magnitude 16.3 and 13.7 (magnitude numbers increase as objects' brightness levels decrease). This year, Pluto will display a brightness of magnitude 14.2. The dwarf planet won't reach its maximum brightness of 13.7 again until the 23rd century!

U.S. astronomer Clyde Tombaugh discovered Pluto on photographic plates taken on Jan. 23 and Jan. 29, 1930. He chose that weeklong interval between photographs to allow the proposed planet to move with respect to the background stars — but not too much, which could have made it hard to track. At the time, Pluto was in the winter constellation of Gemini. The object was 42.3 AU from Earth and shone at a measly magnitude 15.3. Fortunately, it was slightly outside the concentrated star fields of the winter Milky Way, and therefore, the photographs were not overly cluttered with stars. Tombaugh scheduled the images for when the moon was out of the evening sky, too.

Tombaugh then loaded the pair of photographs into a blink-comparator machine that allowed him to flip rapidly between them, and he noted an object that had changed location. After further follow-up to confirm the orbit, the first planet to be discovered by an American was announced.

You can re-create Tombaugh's discovery by selecting and centering Pluto in your astronomy app and then changing the date to the evening of Jan. 23, 1930. The bright star Wasat (Delta Geminorum) will be sitting 36 arc minutes (about a full moon's diameter) above Pluto. Zoom the display until Pluto and Wasat are well-separated, and then take a screen cap. Now, change the date to Jan. 29 and take another screen cap. By comparing the two screens, you can see how Pluto moved toward Wasat. That's what Clyde Tombaugh saw.

Alternatively, you can select and center on Wasat and take another pair of pictures. Or, you can start on Jan. 23 and just advance one day at a time — watching Pluto cross the stars.

On the evenings around opposition in 2018, Pluto will rise in the east at sunset and reach its highest elevation over the southern horizon at 1:30 a.m. local time. Coincidently, Pluto will once again be near the edge of the Milky Way, adding to the challenge of spotting the dwarf planet. However, the new moon will provide perfect conditions for the hunt.

To find where Pluto is during late evening, stand where you have an open southern horizon free of trees and buildings and look for very bright, reddish Mars (it will be hard to miss all month). Next, find yellowish, but dimmer Saturn sitting about 33 degrees (or three fist diameters when held at arm's length) to the upper right of Mars. Using your app, you can select and center Pluto and then activate the app's compass mode, moving your device against the sky and noting where Pluto is located. (It's a good idea to test your compass and gyroscope accuracy on Mars or Saturn first.)

To find Pluto without your device, once the sky is dark enough and the stars begin to appear, look for the teapot-shaped asterism formed by the brighter stars in Sagittarius. Kaus Borealis, the star that marks the teapot's pointed lid, will be 2.5 degrees (or a few fingers' width) below Saturn. The pot's handle will be to the lower left of that star, while the spout will be found to the lower right. The teapot will be very obvious once you find it.

Pluto will be located 7.5 degrees (about a palm's width) to the left of the teapot's handle, about midway between Mars and Saturn, but several degrees above the imaginary line that joins those two bright planets. The nearest naked-eye star will be Al Baldah (Pi Sagittarii), which will be positioned 3.75 degrees to Pluto's upper right. [A Brief History of Pluto Viewing: From Its Discovery to New Horizons Flyby]

Using binoculars, search the sky to the lower left of Al Baldah for the magnitude-5.55 star designated 50 Sagittarii. (The star will be bright in binoculars.) Pluto will be positioned only 12.5 arc-minutes west (to the right) of that star. If you have access to a 10-inch-aperture (254 millimeters) telescope (or larger) and very clear skies, try for Pluto. Both the star and the dwarf planet will fit into the field of view of the telescope at medium-high power. Compare the star field you see in the eyepiece with the stars displayed near Pluto in your app.

Remember that your telescope may invert and/or mirror the sky. In the SkySafari 5 app for Android and the SkySafari 6 app for iOS, tap the upper right corner of the screen to reveal the flip buttons and use the combination that matches your telescope. (It's a good idea to determine the orientation ahead of time using a bigger, brighter object like Saturn.)

Even if Pluto is far too dim to see in your telescope, you will now have the satisfaction of knowing that the dwarf planet is out there, just beyond the edge of our family of planets.

Visualizing a transit of Earth on the sun from Pluto

This opposition of Pluto will also produce a rare and interesting phenomenon that you can model in the SkySafari app: the transit of Earth and the moon across the sun, as viewed from Pluto!

For the most part, all the major bodies in our solar system have orbits aligned within several degrees of the sun's equatorial plane — and of one another. This means they can frequently form alignments. The inner planets Mercury and Venus can transit the sun's disk as viewed from Earth; the moon can pass in front of the sun, producing a solar eclipse, or it can pass in front of, or occult, another planet. Very rarely, one planet can occult another, as viewed from Earth.

However, the Kuiper Belt objects, or trans-Neptunian objects — including Pluto — have orbits that are far different from those of the eight classical planets. The dwarf planet's orbit is tilted by 17 degrees from the sun's equatorial plane, which is one of the reasons the International Astronomical Union (IAU) demoted the object to dwarf planet status in 2006.

This highly tilted orbit usually prevents alignments with other major objects. But when Pluto's at opposition this year, the Earth will fall onto the imaginary line connecting the dwarf planet with the sun. And at that time, an observer on Pluto with a powerful telescope would see the tiny black disks of the Earth and moon transit across the face of the sun! We don't know of any Pluto astronomers, but we can simulate the show using the SkySafari app.

Select Pluto, tap the Orbit icon, and the app will fly you out to Pluto. Next, search for the Earth and tap the Center icon. The view will shift to show the sun and planets. Use two fingers to enlarge the sun until Earth appears. (If you lose sight of our planet, simply tap Center again.)

Open the time-flow controls by tapping the toolbar's Time icon, then set the date to July 12, 2018, and the time to 5:30 a.m. Eastern Daylight Time (adjust for your own time zone). If you continue to enlarge the display, the sun will fill the screen and Earth's round, black silhouette will appear on the sun's disk. Advance the time forward hour by hour to watch the Earth cross the sun's disk. This transit will take about 10 hours. If you enlarge the display enough, the moon's disk will appear, too; notice that the moon's orbit around Earth will bring it closer to the planet while the pair of objects crosses the sun.

In the next edition of Mobile Astronomy, we'll look at the upcoming Mars close opposition. In the meantime, keep looking up!

Editor's note: Chris Vaughan is an astronomy public outreach and education specialist at AstroGeo, a member of the Royal Astronomical Society of Canada, and an operator of the historic 74-inch (1.88-meter) David Dunlap Observatory telescope. You can reach him via email or follow him on Twitter @astrogeoguy, as well as on Facebook and Tumblr.

This article was provided by Simulation Curriculum, the leader in space-science curriculum solutions and the makers of the SkySafari app for Android and iOS. Follow SkySafari on Twitter @SkySafariAstro. Follow us @Spacedotcom, Facebook and Google+. Original article on Space.com.