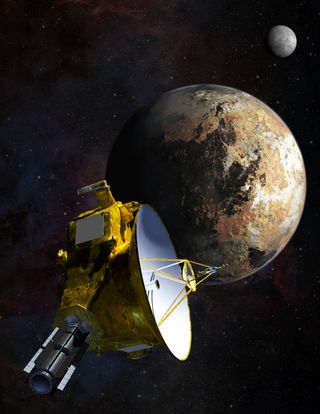 Pluto has captured people's imagination for nearly a century.

The frigid world at the solar system's outer reaches that was discovered in 1930 remains mysterious to this day: because Pluto is relatively small and so far away, telescopes on and near Earth haven't been able to take its measure.

But that is changing, and rapidly. NASA's New Horizons spacecraft is already getting good looks at Pluto, and will return history's first up-close photos of the dwarf planet during a July 14 flyby. [New Horizons' Pluto Flyby: Complete Coverage]

With Pluto's unveiling on the horizon, here's a quick look at past and present efforts to study the elusive world.

The hunt for the ninth planet

Irregularities in the orbits of Uranus and Neptune led a handful of astronomers to conclude that a ninth planet existed beyond these two "ice giants."

Chief among these searchers were American astronomers Percival Lowell and William Pickering. Lowell, who had been enthusiastically investigating the "canals" of Mars, which he attributed to an alien culture, had constructed an observatory in Arizona to better study the planets. In addition to observing Mars and Venus, he spent the last decade of his life searching for the mysterious ninth planet, which he dubbed "Planet X."

In March and April 1915, Lowell Observatory managed to photograph Pluto, although the object remained unrecognized because it was fainter than anticipated. At the time of Lowell's death, on Nov. 12, 1916, Pluto still had not been found.

Lowell was not alone in hunting for the ninth planet. Pickering also sought to find the last planet in the solar system. His calculations for the object's supposed orbit constantly shifted, however. Though at one point his prediction came close to Pluto's actual position, another revision led him to look elsewhere, and Pluto continued to elude him.

Lowell's death left the observatory with significant funds to continue the search. Legal issues regarding his will ended up consuming much of the money, however, temporarily halting the search for the unseen Planet X.

In 1929, Clyde Tombaugh arrived at Lowell Observatory from his Kansas home. An amateur astronomer, Tombaugh had no formal education or training, but he had impressed the head of the observatory. Tombaugh soon began a painstaking search for the predicted ninth planet.

For 10 months, Tombaugh photographed the night sky. Using a tool known as a blink comparator, he studied images two at a time, searching for movement between the plates that would point to Lowell's missing planet. On Feb. 18, 1930, Tombaugh spotted a small, faint object beyond the orbit of Neptune. The discovery of the elusive Planet X was officially announced on March 13, 1930 — Percival Lowell's birthday.

Suggestions poured into the observatory about what to name the solar system's newest known member. Ultimately, the proposal of an 11-year-old English girl named Venetia Burney made the cut, and the ninth planet took its name from the Roman god of the underworld.

Studies eventually showed that Pluto doesn't have the mass necessary to interfere with the orbits of Uranus and Neptune. The errors in calculation that helped lead to its discovery were later attributed to an incorrect mass estimate for Neptune, a value that was refined by NASA's Voyager 2 mission. [Photos from NASA's Voyager 1 and 2 Probes]

The moons of Pluto

For decades, Pluto seemed like the sole occupant of the outer solar system.

Then, on June 22, 1978, American astronomer James Christy noticed that what appeared to be a sizable bump on Pluto changed positions. A series of photos from 1970 showed that the bump — which Christy realized must be a satellite — traveled around Pluto once every six days. Named Charon, after the ferryboat pilot who takes the dead into Pluto's domain in Greek mythology, the big moon provided the break scientists needed to finally understand Pluto itself.

With the help of Charon, astronomers were finally able to pin down a mass and radius for Pluto. They also managed to calculate a mass and radius for Charon, determining that it is about half the diameter and one-seventh the mass of Pluto. This makes Pluto-Charon the largest planet-moon system in the solar system.

The center of mass for the pair actually lies outside of Pluto, at a point between the two bodies. As a result, many astronomers regard Pluto-Charon as a double dwarf planet system.

Pluto and Charon lie so far away from Earth, at the outer edges of the solar system, that astronomers were unable to resolve them as two bodies until NASA's Hubble Space Telescope studied them in 1990.

Charon remained the only known satellite of Pluto for nearly 30 years. Then, scientists turned their attention back to the dwarf planet in search of moons that could cause problems for New Horizons, which launched in January 2006. As a result, Hubble spotted the two small moons Nix and Hydra in 2005. Researchers using Hubble also discovered two additional tiny satellites, eventually named Kerberos and Styx, in 2011 and 2012, respectively. [Photos of Pluto and Its Moons]

Anticipation mounted as New Horizons began closing in on Pluto earlier this year, and many wondered if more small, hidden moons might be found around the dwarf planet. But on July 2, the mission team sounded the all-clear, announcing that no new moons had been found around Pluto. The lack of new satellites means that the spacecraft will stay on its original course through the dwarf planet system and serves as an impressive reminder of Hubble's capabilities.

After Pluto's discovery in 1930, many scientists speculated about the existence of other small, icy bodies in the outer solar system. Compared to its neighbor Neptune and the other gas giants, Pluto seemed to stand out.

Despite these speculations, it wasn't until 1992 that astronomers David Jewitt and Jane Luu discovered a second small, icy body in the neighborhood of Pluto. Six months later, they had found a third. Within a handful of years, the once-empty region of space beyond the ninth planet quickly filled with a population of small, icy rocks.

Tombaugh's discovery ultimately became the first of an entirely new part of the solar system dubbed the Kuiper Belt, after astronomer Gerard Kuiper. Ironically, though Kuiper speculated that such a distant disc of objects might have formed in the early solar system, he did not think it remained.

The Kuiper belt was the beginning of Pluto's downfall as a planet. Today, there are thought to be hundreds of thousands of icy bodies larger than 62 miles (100 kilometers) wide in the Kuiper Belt, and more than a trillion comets.

In 2005, astronomers discovered a large, Pluto-size object eventually named Eris orbiting in the belt. At first, Eris was hailed as the 10th planet. However, in a controversial 2006 ruling, the International Astronomical Union revised the definition of a planet, reclassifying Pluto and giving it the status of "dwarf planet." Both Eris and asteroid-belt occupant Ceres received the same title.

In addition to Eris, two other dwarf planets were later discovered. In 2008, both Makemake and Haumea were classified as dwarf planets in the Kuiper Belt region.

The reclassification of Pluto raised a great deal of ire when it happened, and feelings continue to run high today. Some people speculate that the upcoming visit by New Horizons could help Pluto regain its status as a full-fledged planet.

On July 14, 2015, the New Horizons probe will make the first-ever close approach of Pluto. The spacecraft should provide an unprecedented view of the double dwarf planet system.

When New Horizons launched from Florida on Jan. 19, 2006, Pluto still reigned as a full-fledged planet. It took nine and a half years for the spacecraft to make the journey to the outer edges of the solar system. Along the way, New Horizons performed flyby observations of Jupiter and its moons in 2007, when the massive planet gave the spacecraft a gravity boost.

At the end of May 2015, New Horizons reached the range where its photos were as sharp as images taken by the Hubble telescope. Throughout June, images that surpassed those captured by the space telescope were released to the public almost daily, introducing people to the dwarf planet that had once been merely a blur of pixels.

Chief among the surprises was the strong difference in coloration between Pluto and its largest moon, Charon. While Pluto is reddish brown, Charon has shown itself to be quite gray. The craft has gathered images showing the changing faces of the two, including unusual poles and puzzling spots.

On July 4, the spacecraft suffered a heart-skipping anomaly that caused the craft to enter safe mode only 10 days before its closest approach. The problem turned out to be a timing flaw in the command sequence of the craft — one that should not be repeated. While some science studies were lost, the team announced that the primary objectives of the mission were not affected. New Horizons returned to normal science operations on July 7.

The close approach images that New Horizons returns to Earth will be inspiring, but they will not represent the end of the mission. The spacecraft will continue beaming data home from the flyby for months, and planetary scientists will work to understand the significance of the data for years to come.

And New Horizons will continue to cruise the outer edges of the solar system. The mission team has proposed a mission extension that would — if approved and funded by NASA — send the probe to fly by a second Kuiper Belt object in 2019.