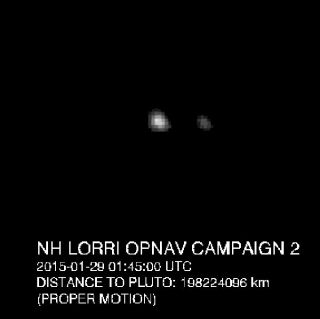 A NASA spacecraft speeding toward an epic Pluto encounter this summer has captured a new movie of the dwarf planet and its largest moon, Charon.

The new Pluto-Charon video was shot by NASA's New Horizons probe, which will make the first-ever flyby of Pluto on July 14. The time-lapse movie consists of a series of images taken by New Horizons' long-range camera from Jan. 25 to Jan. 31.

That's just long enough to cover one day on these icy, distant worlds; Pluto and Charon both rotate once every 6.4 Earth days. The two objects also complete one orbit around their common center of mass, or barycenter, in the same amount of time. (Pluto and Charon are tidally locked to each other, with one body always showing the other the same face.) [Photos from NASA's New Horizons Pluto Probe]

"These images allow the New Horizons navigators to refine the positions of Pluto and Charon, and they have the additional benefit of allowing the mission scientists to study the variations in brightness of Pluto and Charon as they rotate, providing a preview of what to expect during the close encounter in July," New Horizons principal investigator Alan Stern, of the Southwest Research Institute in Boulder, Colorado, said in a statement.

Pluto has five known moons, but aside from Charon, the four others are too small and faint to show up in the new photos, which were taken when New Horizons was about 125 million miles (201 million kilometers) from the Pluto system. Charon is 750 miles (1,207 km) in diameter — about half as wide as Pluto itself.

The $700 million New Horizons mission launched in January 2006 to give researchers their first up-close look at Pluto, which has remained largely mysterious since its 1930 discovery because it is relatively small and lies so far away. On average, Pluto lies 39 times farther from the sun than Earth does and takes nearly 248 years to complete one orbit around the star.

New Horizons began the six-month "encounter phase" of its Pluto mission last month. By sometime in May, the probe's images should be the best ever taken of the dwarf planet, surpassing those captured by NASA's Hubble Space Telescope.

And then, on July 14, New Horizons will zoom through the Pluto system, coming within 8,500 miles (13,600 km) of Pluto's frigid surface. The spacecraft's observations should help scientists better understand how Pluto, Charon and other bodies in the distant Kuiper Belt formed and evolved, mission team members have said.

Stern and his team also want to send New Horizons on to study another Kuiper Belt object beyond Pluto. If NASA approves and funds an extended mission, this second flyby would take place in 2019.