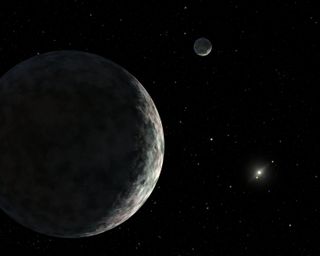 An artist's concept of the dwarf planet Eris and its moon Dysnomia. The sun is the small star in the distance.
(Image: © CalTech)

Eris was one of the first dwarf planets to be discovered in the solar system. It is almost the same size as Pluto, and its discovery directly led to the former ninth planet's demotion. Eris also has a moon, Dysnomia, which was discovered not long after Eris.

Is Eris a planet or a dwarf planet?

When Eris was first discovered in 2005, astronomers thought it was significantly larger than Pluto and even considered whether or not Eris could be the 10th planet in our solar system. Ultimately, however, Eris' discovery and learning it was such a small planet was why astronomers wound up demoting Pluto to dwarf planet status in 2006. That decision remains controversial to this day, making Eris' name fitting.

"Eris is the Greek goddess of discord and strife," astronomer Mike Brown, a member of the Eris discovery team, said in a statement from the California Institute of Technology. "She stirs up jealousy and envy to cause fighting and anger among men. At the wedding of Peleus and Thetis, all the gods were invited with the exception of Eris, and, enraged at her exclusion, she spitefully caused a quarrel among the goddesses that led to the Trojan War."

Like almost all of the known dwarf planets (with the exception of Ceres), Eris lies in the Kuiper Belt, which rings the outer solar system. But Eris is even farther-flung than Pluto, circling our star about three times farther away. It takes 561 years for the distant dwarf planet to make a single trip around the sun, though it rotates once every 25 hours, making the length of its day very similar to a day on Earth.

Eris' distance allowed astronomers to make precise measurements when the dwarf planet passed in front of a dim star in 2010, in an event known as an occultation. In addition to measuring Eris’ size, researchers were also able to determine its shape, size and mass.

The observations helped scientists determine that Eris' diameter is 1,445 miles (2,326 kilometers), give or take 7 miles (12 km). That makes it slightly smaller than Pluto. When New Horizons reached Pluto, the spacecraft measured the diameter of the planet and found it to be 1,473 miles (2,370 km) across, which is about two-thirds the diameter of Earth's moon.

Newer studies show that Eris likely is a spherical body. And, by studying the motion of Eris' moon, Dysnomia (which was also discovered in 2005), they estimate the dwarf planet is about 27% heavier than Pluto, which means it's denser than Pluto as well.

Eris' surface was also found to be extremely reflective, bouncing back 96% of the light that hits it. That makes Eris one of the most reflective bodies in the solar system, roughly on par with Saturn's icy moon Enceladus. [Top 10 Extreme Planet Facts]

Researchers think Eris' surface is probably composed of a nitrogen-rich ice mixed with frozen methane in a layer less than 1 millimeter thick. This ice layer could be the result of the dwarf planet's atmosphere condensing as frost on the surface as it moves away from the sun, they said.

Astronomers estimated that the side of the dwarf planet facing the sun likely gets no warmer than minus 396 degrees Fahrenheit (minus 238 degrees Celsius), while temperatures on the night side would be even lower.

The extreme distance of Eris, coupled with its small size, make it difficult to observe the dwarf planet without powerful telescopes and advanced technology.

While there are no spacecraft expected to fly by Eris in the near future, researchers will get a better look at the dwarf planet after the James Webb Space Telescope launches in 2021. The JWST website specifically mentions Eris as a target of interest and adds that the telescope will look at small objects in the solar system to better characterize what their landscapes are made of.

Separately, a group of astronomers (including Alan Stern, the principal investigator of the Pluto mission New Horizons) has asked the community to reconsider the International Astronomical Union's definition of "planet." They propose that all dwarf planets be made planets, which would also include Eris.

This article was updated on July 10, 2019 by Space.com Contributor Elizabeth Howell.