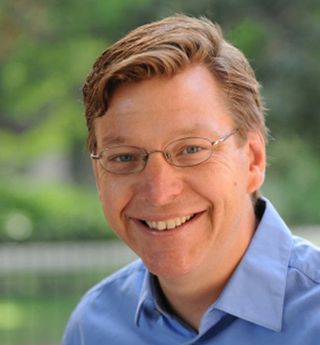 Caltech researcher Mike Brown led the team that found the dwarf planet Eris in 2005. The discovery helped spur astronomers to rethink the definition of "planet," and ultimately strip Pluto of its planethood.
(Image: © Mike Brown)

Mike Brown is best known as the man who killed Pluto.

The Caltech astronomer led the team that discovered Eris, a rocky world circling the sun far beyond Pluto, in 2005. Eris was thought to be larger than Pluto, and the find helped spur astronomers to redefine just what a planet is.

In 2006, the International Astronomical Union stripped Pluto of its planethood, placing it — along with Eris and potentially many other bodies — into a newly created category: dwarf planet.

But Brown is not all about Eris. The astronomer has discovered many other objects in the Kuiper Belt, the ring of icy bodies beyond Neptune's orbit.

SPACE.com recently caught up with Brown to chat about Pluto's demotion, why his view of the Kuiper Belt has changed dramatically in the last few weeks and how he got hooked by the mysteries of the outer solar system.

You have a book coming out soon. It's called "How I Killed Pluto and Why It Had It Coming."

Yes, on Dec. 7 it's coming out. On Pearl Harbor Day, we re-bomb Pluto.

The point of the book is really that Pluto would never have been called a planet if it were discovered today — if we knew about the eight planets and then just now started going out and discovering objects in the Kuiper Belt.

Here's a thought experiment. Imagine that Pluto doesn't exist. Then in 2005 I discover Eris, which is essentially the same size as Pluto. Not a single person on Earth, I suspect, would suddenly jump up and say, "You just discovered a planet."

It would be clear that Eris is at the upper end of the Kuiper Belt objects. It's just a funny historical accident that we found Pluto so early, and that it was the only thing known out there for so long.

No one in their right mind would not have called it a planet back then, because we didn't know any better. But we have progressed so much further in our understanding of what the solar system is that it's pretty obvious. We can go back and reassess the mistakes of our ancestors.

Are you surprised that many astronomers still regard Pluto as a planet?

There aren't many astronomers. There is a very small number of very vocal people.

I think that's not true. I think that Pluto as an example of a large Kuiper Belt object is so much more interesting than Pluto as this very weird planet at the outer edge of the solar system, unlike anything else.

About two weeks ago, astronomers made some new observations that suggest Pluto may be larger than Eris after all. What's your reaction?

When we first learned about Eris five years ago, we said, "This is essentially a Pluto twin." It looked the same. Both Pluto and Eris have surfaces covered in methane and nitrogen.

So the fact that they're the same size but the densities are so different — that's totally unexpected.

Why is it so unexpected? Why wouldn't you expect to see some diversity in what Kuiper Belt objects are made of?

Just five years ago, the only things we knew in the outer solar system were Pluto and Triton [Neptune's largest moon, thought to have been captured from the Kuiper Belt]. Both are about 70 percent rock and 30 percent ice.

So if you had asked me then what everything else in the outer solar system is made of, I would've said they're all the same — 70 percent rock, 30 percent ice. Because you expect that the regions from which these things formed would have been pretty uniform.

And to get something the size of Pluto or the size of Eris, you really have to sweep up a good bit of the other objects around you. Even if there were variations in some of the smaller objects, you're averaging together so much stuff that you're presumably going to get the same result.

But it now looks like Eris is more like 95 percent rock or some incredibly large fraction. It's basically a rock, with a little bit of frosting on the outside of it.

So how can we explain the differences?

Eris must have a history, or a formation location, or something, that's entirely different from Pluto. If you had asked me even [two weeks] ago, I would've said, "That's a stupid thing to even propose." And yet it must be true, if these measurements turn out to be right.

Maybe Eris, and a few of the other Kuiper Belt objects that look very much like it, formed much closer to the sun, where there was less ice. Maybe it formed in the asteroid belt and then got flung out there.

Of course, Eris contains more mass than the entire asteroid belt put together, so it's a little bit implausible, I think. An object the size of the entire rest of the asteroid belt got ejected and put in the Kuiper Belt? There are just a few too many coincidences going on there.

The other idea, that I favor, is that Pluto and Eris have had different histories. One of the ways that you make something have more rock on it and less ice on it, is to have big impacts occur on an icy, rocky body.n

Those big impacts would preferentially eject the outer icy layers and leave the rocky stuff intact. So you can imagine that Eris has had a more violent history than Pluto.

But again, you'd still think — they all formed out there in the same place, so they should have statistically more or less the same history.

And to change something having 30 percent ice to almost 0 percent ice, you can't do it in a single impact. You'd have to have a series of collisions to do it. With so many collisions happening, again you'd expect it to all average out.

Is it fair to say that our view of the outer solar system has changed in the past two weeks or so?

My view of the outer solar system sitting here right now is different than it was [two weeks ago]. I thought I understood the largest bodies. But suddenly this thing is no longer a Pluto twin but an incredibly different object.

It just opens your eyes. Eris is telling us something about an entirely different history of the outer solar system that we didn't realize before.

It's the most fun part of science. You have these stories constructed in your head, and then something comes along and shows you that they're absolutely wrong and you have to start from scratch again. That's as fun as it gets.

It's a little frustrating, though, isn't it? Because these objects are so far away, it's going to be a long time before we can get a good look at most of them. So aren't these questions going to be hard to answer?

They are. Eris will be close by, and we'll get a nice close-up view of it, in 290 years. So if you can wait for that one, it'll be pretty good.

But you're right. These things on the edge of the solar system — they were hard to find, and they're hard to study. It's a long process, learning more about them. We're in it for the long haul.

How did you get so interested in the outer solar system?

I can tell you the exact moment, and where I was standing. The second Kuiper Belt object — the first was Pluto — the second was discovered in 1992 by Dave Jewitt and Jane Luu.

Jane Luu's office was two doors down from mine when I was a graduate student at Berkeley. I was standing on the roof of the Berkeley astronomy department, staring out across the San Francisco Bay, and she walked up the stairs and said, "Psst. I've got a secret."

And it just blew my mind. Things you thought you understood about the solar system — that it ended at Pluto, and that's all there was — it was suddenly clear that there was a lot more out there, and this was going to be an incredibly rich region for trying to understand how the solar system put itself together.

From that moment, it was something I was eager to go learn about.