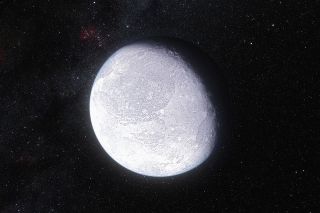 This artist's impression shows the distant dwarf planet Eris. New observations have shown that Eris is smaller than previously thought and almost exactly the same size as Pluto. Eris is extremely reflective and its surface is probably covered in frost formed from the frozen remains of its atmosphere.
(Image: © ESO/L. Calçada )

Though the dwarf planet Eris on the edge of the solar system is much denser than Pluto, the two frigid worlds are nearly exactly the same size, a new study finds.

Astronomers accurately measured Eris' diameter for the first time using observations made late last year, when they caught the dwarf planet as it passed in front of a dim star. The observations, made using several telescopes in Chile, revealed that Eris and Pluto are pretty much identical in size, making them "almost perfect" twins, researchers said.

When Eris was first discovered in 2005, it was thought to be significantly larger than Pluto. In fact, Eris' discovery was a big reason astronomers demoted Pluto to dwarf planet status in 2006. That decision remains controversial to this day, making Eris' name fitting: Eris is the Greek goddess of discord and strife, who stirred up jealousy and envy among the goddesses, leading to the Trojan War.

The new observations should help astronomers learn more about Eris' composition and evolutionary history. They show, for example, that the dwarf planet has a surface even more reflective than Earth's snow, suggesting it's covered in a thin layer of ice.

"It is extraordinary how much we can find out about a small and distant object such as Eris by watching it pass in front of a faint star, using relatively small telescopes," study lead author Bruno Sicardy, of the Pierre et Marie Curie University and Observatory of Paris, said in a statement. "Five years after the creation of the new class of dwarf planets, we are finally really getting to know one of its founding members." [Meet The Solar System's Dwarf Planets]

Eris and Pluto both occupy the Kuiper Belt, the distant ring of frigid bodies beyond Neptune. But Eris is even farther-flung than Pluto, circling our star from about three times farther away.

In November 2010, Eris passed in front of a faint background star from Earth's perspective. This event, known as an occultation, provided a rare opportunity for astronomers to learn about the dwarf planet.

"Observing occultations by the tiny bodies beyond Neptune in the solar system requires great precision and very careful planning," Sicardy said. "This is the best way to measure Eris's size, short of actually going there."

Astronomers made a coordinated effort to observe the occultation from 26 locations around the globe. Two sites in Chile hit pay dirt, including the La Silla Observatory, which is run by the European Southern Observatory.

It also means that Pluto and Eris are, for all intents and purposes, the same size, researchers said.

Sicardy and his colleagues publish their results in the Oct. 27 issue of the journal Nature.

The researchers also conclude that Eris is a spherical body. And, by studying the motion of Eris' moon Dysnomia, they peg the dwarf planet to be about 27 percent heavier than Pluto, which means it's considerably denser than Pluto as well.

"This density means that Eris is probably a large rocky body covered in a relatively thin mantle of ice," said co-author Emmanuel Jehin, of the Institut d'Astrophysique de I'Université de Liège in Belgium.

Eris' surface was also found to be extremely reflective, bouncing back 96 percent of the light that strikes it. That makes Eris one of the most reflective bodies in the solar system, roughly on par with Saturn's icy moon Enceladus. [Top 10 Extreme Planet Facts]

Researchers believe Eris' surface is probably composed of a nitrogen-rich ice mixed with frozen methane in a layer less than 1 millimeter thick. This ice layer could result from the dwarf planet's atmosphere condensing as frost onto its surface periodically as it moves away from the sun, they said.

The new observations also allow researchers to make another estimate for the surface temperature of Eris. The side of the dwarf planet facing the sun likely gets no warmer than minus 396 degrees Fahrenheit (minus 238 Celsius), while temperatures on the night side would be even lower, researchers said.