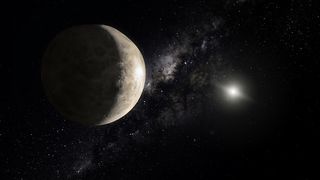 An artist's illustration of Makemake, a dwarf planet out beyond the orbit of Neptune that also qualifies as a plutoid.
(Image: © IAU/M. Kornmesser)

Astronomers have discovered three small, icy worlds orbiting the sun near Pluto, on the outer reaches of the solar system.

The three newfound bodies are likely big enough to be rounded by their own gravity, which means they may be "dwarf planets" like Pluto, researchers said. Scientists discovered them and eleven other new objects while performing a survey of the Kuiper Belt, the ring of icy bodies beyond Neptune.

"Three of the discoveries would be in the dwarf planet regime," said study lead author Scott Sheppard, of the Carnegie Institution of Washington. "The others were much smaller, and they're probably just irregular chunks of ice or rock." [Photos of Pluto and Its Moons]

Sheppard and his colleagues surveyed the Kuiper Belt, which is found roughly between 30 and 50 astronomical units (AU) from the sun. The distance from the Earth to the sun, about 93 million miles or 150 million kilometers, is 1 AU.

Using the 1.3-meter Warsaw Telescope at Las Campanas Observatory in Chile, the team focused their search on the southern skies and the galactic plane, areas that had not been covered completely in previous Kuiper Belt surveys.

They found three objects that seem to be more than 250 miles (400 km) wide — for icy bodies, probably big enough to be molded into a sphere by their own gravity, Sheppard said. That would likely qualify them for "dwarf planet" status.

The International Astronomical Union (IAU) created the dwarf planet category back in 2006, when it became clear that Pluto wasn't alone on the cold outskirts of the solar system. Basically, in the IAU's estimation, dwarf planets are big enough to be spherical but too small to have "cleared their neighborhoods" of other orbiting bodies.

So Pluto was demoted to dwarf planet, a status it shares with the other icy, faraway bodies Eris, Haumea and Makemake, as well as the giant asteroid Ceres. These are the only five officially recognized dwarf planets at the moment, although hundreds or even thousands more may exist.

The new survey didn't find any objects as big as Pluto or Eris, which are both roughly 1,450 miles (2,333 km) wide. Before this search, the existence of other Pluto-size bodies in the Kuiper Belt had been a real possibility, Sheppard said, because the southern skies had not been searched comprehensively.

"This survey basically completes the Belt for the big stuff," Sheppard told SPACE.com. "So Pluto and Eris are the kings of the Kuiper Belt area, basically." [Our Solar System: A Photo Tour of the Planets]

The study has been accepted for publication in the Astronomical Journal.

While no more truly massive objects are likely awaiting discovery in the Kuiper Belt, some may lurk even farther away, Sheppard said.

For example, astronomers know of one object, called Sedna, that orbits up to 940 AU from the sun. Sedna, which appears to be at least 745 miles (1,200 km) wide, has an extremely elliptical orbit that brings it to within about 75 AU of the sun at its closest point.

Much about Sedna is a mystery at the moment — including how busy its neck of the cosmic woods may be.

"Sedna is basically the frontier right now in the solar system," Sheppard said. "We've found one object, and it's likely there's a bunch more out there. But the technology right now is just barely at the ability for us to efficiently detect these things."

Objects even bigger than Sedna may zip around the sun undetected in the cold, dark depths of the far outer solar system, Sheppard said. Even planet-size bodies could have escaped notice to this point, if they're far enough away.

"There could still be Mars- or even Earth-size objects way out there, at hundreds of AU, that would be too faint for us to detect," Sheppard said. "It's pretty amazing when you think about it. It's unlikely, but it's possible."