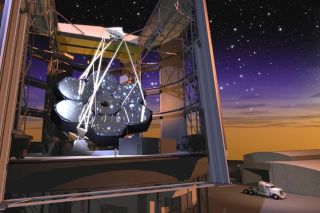 Plans for an enormous new telescopein Chile took a majorstep forward this week with a $50 million infusion from the UniversityofChicago to aid the observatory's construction.

The Giant Magellan Telescope willconsist of six circularmirrors, each 28 feet (8.4 meters) across, set in a flower-petalarrangementaround a seventh central mirror to make up the GMT's main mirror. Together,the mirrors form the equivalent of a nearly 82-foot (24.5-meter)telescope. Thenew telescope will be built at the Las Campanas Observatory in Chile,andshould take about seven years to complete.

Dark matter and darkenergy are two central mysteries of modern cosmology. Thoughneither hasbeen detected directly, scientists suspect they exist because of theirperceived affect on the rest of the matter in the universe.

By gathering more observations of thedistant universe,astronomers hope to better understand these puzzling quantities. Thenewtelescope could play a major role in that quest, scientists said.

"This is part of the goal of lookingfor Earth-likeplanets around other stars that could be the sites for life," saidEdward Kolb,chairman of the University of Chicago’s Department of Astronomy andAstrophysics. "This is one of the new avenues that the Giant MagellanTelescope will open, in addition to being able to look at the sky withunprecedented resolution and light-gathering power."

The total price tag for theinstrument will be split among itspartners: the Carnegie Institution for Science in Washington, D.C., theUniversityof Texas at Austin, Harvard University, Australian National University,Smithsonian Astrophysical Observatory, the University of Arizona, TexasA&MUniversity, Astronomy Australia Ltd., and the Korea Astronomy and SpaceScienceInstitute.