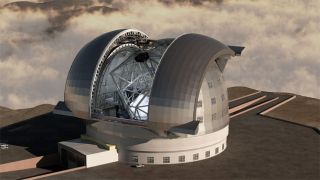 A new architectural concept drawing of ESO’s planned European Extremely Large Telescope (E-ELT) shows the telescope at work, with its dome open and its record-setting 42-metre primary mirror pointed to the sky. In this illustration, clouds float over the valley overlooked by the E-ELT’s summit.
(Image: © ESO)

The world?s largest optical telescope ? to be called,appropriately, the European Extremely Large Telescope ? will be built on amountain in Chile, the observatory's planners announced Monday.

The telescope's newly chosen home is the Cerro Armazonesmountain in the central part of Chile?s Atacama Desert. This location was pickedfor its optimal weather conditions ? the skies are clear overhead about 320nights a year, according to its European Southern Observatory (ESO) builders.

Chile's Cerro Amazones beat out a bid by Spain to build the EuropeanExtremely Large Telescope (E-ELT) in that country's La Palma region. But theChilean location won in the end because of its balance between consistent clearnight skies and the ability to work in conjunction with other nearbyobservatories run by ESO, which is an astronomy collaboration by 14 Europeancountries.

The new mega-observatory will have a primary mirror 138 feet(42 meters) wide and is reportedly expected to cost more than 1 billion Euros (US$1.3billion).

In comparison, other famousoptical telescopes, like the Keck Observatory in Hawaii (with a mirror 33feet, or 10 meters, wide) and the 27-foot (8.2-meter) Subaru telescope, also inHawaii, will be dwarfed by its size. The HubbleSpace Telescope, with a mirror almost 8 feet (2.4 meters) wide, soundstiny, but it can achieve higher resolutions than many larger Earth-basedtelescopes by being outside of Earth's atmosphere.

"This is an important milestone that allows us tofinalize the baseline design of this very ambitious project, which will vastly advanceastronomical knowledge," said Tim de Zeeuw, ESO's director general. ?Ithank the site selection team for the tremendous work they have done over thepast few years.?

ESO already operates three observatories in Chile, includingthe ParanalObservatory and its so-called VeryLarge Telescope (VLT), which is also in the Atacama Desert, a little morethan 12 miles (20 km) away from Cerro Armazones. Since they are so close, thenew telescope will be operated in cooperation with Paranal.

"Adding the transformational scientific capabilities ofthe E-ELT to the already tremendously powerful integrated VLT observatoryguarantees the long-term future of Paranal as the most advancedoptical/infrared observatory in the world and further strengthens ESO?s positionas the world-leading organization for ground-based astronomy," de Zeeuw said.

Construction on the European Extremely Large Telescope isexpected to receive a final go-ahead at the end of 2010, and the observatorycould begin operations in 2018.