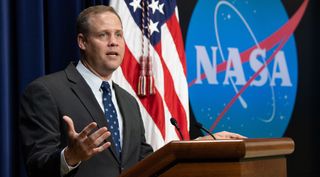 NASA Administrator Jim Bridenstine has wanted someone with a technical background and space experience to be his deputy, but the White House instead nominated a longtime Senate aide for the post.
(Image: © NASA/Joel Kowsky)

WASHINGTON — The White House nominated a veteran Senate aide with little space experience to be NASA's deputy administrator July 12, a month after the agency's administrator said he wanted someone with technical expertise for the job.

In a statement, the White House announced its intent to nominate James Morhard to be deputy administrator. The position, like that of administrator, requires confirmation by the Senate.

Morhard has been the deputy sergeant-at-arms for the Senate, handling various administrative issues for the body, since early 2015. He served in various other staff roles in the Senate from the early 1980s until 2005, including chief of staff of the Senate Appropriations Committee and staff director of what is now its commerce, justice and science subcommittee, whose jurisdiction includes NASA. [Presidential Visions for Space Exploration: From Ike to Trump]

Prior to working in the Senate, Morhard was an analyst in the Secretary of the Navy's Office of the Comptroller. He also worked as a lobbyist after leaving the Senate in the mid-2000s until his return in 2015. His education includes an M.B.A. from George Washington University and a law degree from Georgetown University.

Other than his appropriations experience, there's little in his background to suggest familiarity with NASA and its activities. His nomination appears to run counter to the wishes of Administrator Jim Bridenstine, who a month ago said he wanted someone with strong technical experience as his deputy.

He reiterated that two days later. "We need a space professional, we need a scientist, we need somebody who has been involved at NASA for a very long time. It would be beneficial to me if that person was an astronaut," he said June 14 at a meeting of the Federal Aviation Administration's Commercial Space Transportation Advisory Committee.

In both cases, he mentioned one specific person: Janet Kavandi, a former astronaut who is currently director of NASA's Glenn Research Center. "Of course, the person I've been advocating for is Janet Kavandi," he said June 14, with Kavandi in the audience.

In a July 9 interview, though, Kavandi said she didn't have any updates regarding a potential deputy administrator nomination. "I'm honored to be considered," she said. "We'll see how it plays out. I'm sure there are other people that they're considering as well." A day later, the publication Quartz first reported Morhard was being considered for the job.

The White House announcement came as Bridenstine was out of the country on his first foreign trip as the head of NASA, meeting officials in Israel. "This administration is committed to American leadership in space, and I look forward to working with Mr. Morhard upon his confirmation," Bridenstine said in an agency statement issued late July 12.