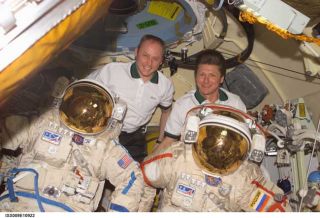 After nearly six months in space, the crew of the International Space Station (ISS) has entered the homestretch of a mission that ISS managers consider a success despite a few hitches.

ISS Expedition 9 commander Gennady Padalka and flight engineer Michael Fincke spent 169 days living and working aboard the ISS since their arrival at the station on April 21. Four spacewalks -- two of which were unplanned -- and one spacesuit fix later, they're preparing to return to Earth.

"We've accomplished all of our major mission objectives, which is quite remarkable considering we had to add a spacewalk," said Matt Abbott, lead flight director for Expedition 9 at NASA's Johnson Space Center in Houston, during an Oct. 4 mission briefing.

In addition to their station keeping duties, Padalka and Fincke were expected to make only two spacewalks during their time aboard the ISS. But just days after they arrived at the station, a circuit breaker with the station's attitude control system failed, prompting two ad hoc extravehicular activities. The astronauts were also forced to use Russian spacesuits due to glitches with U.S.-built Extravehicular Mobility Units.

Through it all, the crew kept its composure and speedily completed the spacewalks, finishing nearly all of them ahead of schedule. Later, Fincke was able to repair one of the malfunctioning U.S. spacesuits. The crew has also performed repairs on a station window and oxygen-generating device.

Earlier today, the Expedition 9 crew spoke with reporters about their mission and their anticipation for their Earthly return.

"We've had a really exciting expedition here," Fincke said via a video downlink. "But I'm looking forward to having some family time, I owe [my family] everything."

While Fincke worked in orbit, his wife Renita gave birth to their daughter Tarali Paulina on June 18.

ISS flight controllers commended Fincke for his dedication to scientific research during the mission, adding that he performed 45 percent of the entire mission's science during his free time on Saturdays.

Padalka and Fincke are eagerly awaiting their replacements, Expedition 10 astronauts Leroy Chiao and Salizhan Sharipov, who are expected to arrive at the space station on Oct. 16. Cosmonaut Yuri Shargin will accompany the Expedition 10 crew to the ISS and return to Earth with Fincke and Padalka on Oct. 23.

"They certainly haven't lost their smiles," Abbot said of Padalka and Fincke. "They've just gotten bigger throughout the increment."