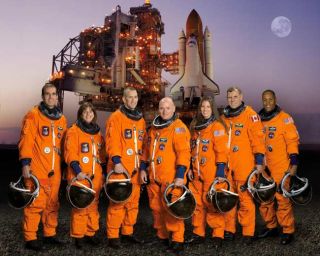 NASA mission managersdecided Thursday to bump up the planned August launch of the shuttle Endeavour,giving the spacecraft's seven-astronaut crew a head start on a what is expectedto be a busy month for spaceflight.

Initially targeted for anAug. 9 launch, Endeavour's STS-118 crew is now on track to fly two days earlyon what will be the orbiter's firstspaceflight since 2002. The extra time will give NASA added flexibility tolaunch Endeavour from the Kennedy Space Center (KSC) between the planned Aug. 3flight of the agency's MarsPhoenix lander and the Aug. 11 liftoff of an Atlas 5 rocket from the nearbyCape Canaveral Air Force Station.

"They did elect tomove the target date to Aug. 7 to increase our launch opportunities," NASAspokesperson Kyle Herring, of the agency's Johnson Space Center in Houston,Texas, told SPACE.com.

The move will allow more timebetween the launch of Endeavour from KSC and the Atlas 5 rocket carrying theU.S. military's Wideband Global SATCOM communications satellite. The planned spaceshots, as well as the earlier Phoenix launch, will liftoff over the EasternTest Range that encompasses both KSC and the Cape Canaveral Air Force Station.Range restrictions typically call for a 48-hour buffer period between thelaunches.

The STS-118 crew also includeseducator-astronaut Barbara Morgan, who haswaited more than 20 years to fly aboard a shuttle since she was first chosen asbackup for schoolteacher Christa McAuliffe during NASA's Teacher in Spaceprogram. McAuliffe and six NASA astronauts died during the 1986Challenger accident.

Endeavour's planned 11-daymission will mark NASA's second of the year to continue assembly of the ISS. Theshuttle Atlantis successfully completeda 14-day mission on June 22 and NASA hopes to launch up to three moreshuttle flights in 2007.