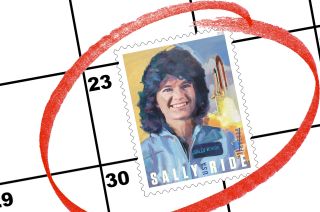 The U.S. Postal Service will release a stamp in honor of astronaut Sally Ride on May 23, 2018 in La Jolla, California.
(Image: © USPS/collectSPACE.com)

A new U.S. postage stamp honoring the late Sally Ride, the first American woman to fly into space, now has a launch date.

The U.S. Postal Service (USPS) on Wednesday (Feb. 28) set May 23, 2018 as the first day of issue for its Sally Ride commemorative Forever stamp. A ceremony will be held in La Jolla, California.

More details about the stamp's dedication will be released at a later date, the USPS said. [Sally Ride: First American Woman in Space (Pictures)]

Based on a preliminary design released in December, the Sally Ride stamp will depict the astronaut at the time of her first spaceflight in June 1983 set against a backdrop of the space shuttle lifting off.

"Sally Ride inspired the nation as a pioneering astronaut," the USPS said in a statement at the time.

The stamp's release date is two months shy of the six year anniversary of Ride's death of pancreatic cancer at age 61 on July 23, 2012. Living individuals cannot be the subject of U.S. stamps per criteria set by an advisory committee.

Ride was selected to be an astronaut in 1978 as a part of the first class of candidates to include female trainees. As a mission specialist assigned to STS-7, the second flight of space shuttle Challenger, Ride became the first American woman to launch into space. (She was preceded into orbit by two Russian cosmonauts: Valentina Tereshkova in 1963 and Svetlana Savitskaya in 1982.)

After retiring from NASA in 1987, Ride went on to become a professor of physics at the University of California, San Diego, and authored several children's science books. She also cofounded Sally Ride Science, a non-profit to promote learning and careers in STEM.

"As a young girl, Sally collected stamps. She would be so honored to now appear on a stamp!" said O'Shaughnessy in a statement released in December.

Ride is the second U.S. astronaut to be commemorated on a USPS stamp. In May 2011, the postal service released a stamp in honor of the late Alan Shepard, the first American to fly in space and the fifth human to walk on the moon.

In addition to announcing the date for the Sally Ride stamp on Wednesday, the USPS also set April 6, 2018 as the first day of issue for four stamps dedicated to STEM (science, technology, engineering and mathematics) education. The stamps, which will be issued at a ceremony in Washington, D.C., includes one with the outline of NASA's Apollo moon spacecraft in a collage symbolizing "Engineering."