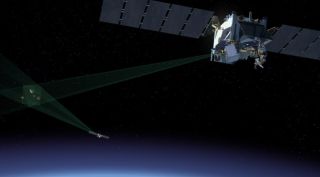 BOSTON — The U.S. Missile Defense Agency (MDA) is delaying until sometime in the spring of 2008 the planned launch of two experimental missile tracking satellites. Launch of those satellites had been scheduled for November, according to an MDA official.

However, the agency still plans to go ahead with the launch of a related classified demonstration payload before the end of the year. That launch initially was slated to follow the launch of the Space Tracking and Surveillance System (STSS) Block 06 satellites, according to an agency official but the STSS Block 06 launch is being moved to a spring launch because of launch range conflicts and a delay in the completion of vacuum testing of the two satellites, the official MDA said.

The two satellites will launch together aboard a Delta 2 rocket built by United Launch Alliance. The classified payload, which also is expected to launch aboard a Delta 2 rocket, is known as STSS Block 2010 Risk Reduction, and is intended to explore alternate technology for potential missile defense application, according to the MDA official.

Northrop Grumman Space Technology of Redondo Beach, Calif., is the prime contractor for the STSS program. The satellites for the Block 06 demonstration feature infrared payloads developed by Raytheon Space and Airborne Systems of El Segundo, Calif. Those infrared payloads were originally intended for an experiment under the Space Based Infrared System-Low program that was canceled in 1999 due to cost overruns.

Bob Bishop, a Northrop Grumman spokesman, provided a written statement from the company that said the company "is committed to a successful launch" of the Block 06 demonstration satellites. "STSS will be the only provider of space tracking and surveillance in the mid-course phase and also will play a vital, complimentary role in the space situational awareness future architecture - both missions that are essential to our security," Northrop Grumman said in the statement.

John Barksdale, a Raytheon spokesman, deferred to MDA for comment.

The Government Accountability Office found a variety of issues with the STSS program in a March 15 report that examined MDA's acquisition portfolio. The report noted that the first satellite's payload experienced hardware failures when tested in a vacuum and at cold temperatures, which delayed integration with the spacecraft platform.

Northrop Grumman responded to these issues by tightening its inspection and oversight of Raytheon's work, according to the report.

Meanwhile, the STSS program is facing the prospect?of a reduction to its 2008 budget request of $322 million. The House of Representatives cut $75 million from the program in its version of the 2008 defense authorization, which it passed on May 17, and expressed concern that MDA is developing plans for an operational constellation of satellites that would launch for the first time around the middle of the next decade before fully evaluating the results of the experimentation with the Block 06 satellites.

The Senate Armed Services Committee, which sent its version of the bill to the Senate floor June 5, where it is awaiting a vote, expressed similar concerns to those of its House counterparts in a report accompanying its version of the bill. The committee cut $55 million from the STSS budget request, which it said intended to stop work in 2008 for the follow-on constellation.