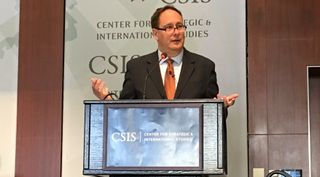 NASA Acting Administrator Robert Lightfoot said the agency's upcoming budget proposal will detail "what we've been asked to go do and how we think we're going to do it" regarding a human return to the moon.
(Image: © Jeff Foust/SpaceNews)

WASHINGTON – Details about how NASA will implement a space policy directive regarding a human return to the moonwill be in the agency's 2019 budget request, scheduled for release as soon as early February.

NASA Acting Administrator Robert Lightfoot, speaking at a Center for Strategic and International Studies (CSIS) civil space forum here Jan. 18, didn't discuss specifics of those plans, but suggested both international and commercial partnerships would play key roles in NASA's approach to implementing Space Policy Directive 1. That directive, signed by President Trump Dec. 11, instructed NASA to return humans to the moon "for long-term exploration and utilization" as a step towards later missions to Mars "and other destinations."

"We're getting ready to embark on a pretty strong lunar exploration program with an eye towards Mars," he said in his prepared remarks at the conference. [From Ike to Trump: Presidential Visions for Space Exploration]

In an onstage interview after the speech, Sean O'Keefe, a former NASA administrator who is now a distinguished senior adviser at CSIS, asked Lightfoot if he could give a "preview of coming attractions" about that plan. Lightfoot declined, as the details of the budget are embargoed until its release.

The White House has not announced a date for the formal release of the 2019 budget request. Under federal law, the president is supposed to submit the budget to Congress on the first Monday in February, which this year would be Feb. 5. However, it's not uncommon for administrations to delay that release, sometimes by several weeks, depending on issues such as the passage of the previous budget.

On Jan. 16, NASA announced a series of "State of NASA" events at 10 field centers scheduled for Feb. 5 to give its social media followers behind-the-scenes glimpses of the agency's activities. In recent years, those State of NASA events have coincided with the release of the agency's budget proposal, including the release of the fiscal year 2018 budget proposal in May 2017. [Trump's 'Back to the Moon' Directive Leaves Scientists with Mixed Feelings]

The policy directive instructs NASA to work with "commercial and international partners" in its implementation. O'Keefe asked Lightfoot if the International Space Station partnership could be "a potential framework to go pursue the broader guidance you received, in terms of the policy direction, to go back to the moon and on to any other destination."

"It's definitely going to be kind of a benchmark or best practice," Lightfoot said, also emphasizing the growing commercial space sector. "It's bringing capability that's actually going to help us, in a more integrated way, get more missions done."

Lightfoot, as he has said in the past, emphasized an "and, not or" approach to exploration that includes both government systems, such as the Space Launch System and Orion, as well as commercial capabilities. That also incorporates a strategy, he said, where the agency shifts from leading the development of systems to collaborating with industry and then leveraging industry capabilities. "That allows us to let go of some things and move on to the things the agency should be doing," he said.