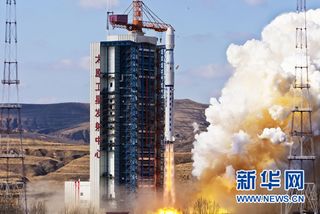 WASHINGTON — It should be no surprise that China is moving to challenge the United States for dominance in space, cyber, artificial intelligence and other key technologies that have wide national security applications. But the question that is still being debated is whether the United States is taking this threat seriously.

This may not be a Sputnik moment, but the United States could soon be unpleasantly surprised as China continues to shore up its domestic capacity to produce high-end weapons, satellites and encryption technologies, a panel of analysts told the House Armed Services emerging threats and capabilities subcommittee.

At the Tuesday hearing, Subcommittee Chairman Rep. Elise Stefanik, R-N.Y., said lawmakers are not entirely convinced that China’s dominance in many technology sectors is a "foregone conclusion." But the committee does believe that China's technological accomplishments should inform U.S. policies and defense investments. [The Most Dangerous Space Weapons Concepts Ever]

"China continues to increase their research and development investments at an alarming pace and is rapidly closing many of their technology gaps," Stefanik said. "More and more, we see China using only domestic Chinese firms and creating high market access barriers to support domestic capacity."

There are strict laws and regulatory barriers in place to prevent China from accessing U.S. technology and from acquiring American companies. Fear of Chinese theft of space technology has shaped some of the most stringent U.S. export control policies. But China nonetheless has built up a significant satellite manufacturing industry, and has managed to develop quantum communications spacecraft with advanced encryption features.

"China's satellite manufacturing industry is growing at an alarming rate," said Rep. Doug Lamborn, R-Co. "In the past two years Chinese factories have pumped out 40 satellites."

The government there subsidizes launch costs to prop up its state-owned entities, he said. "This in turn places our own satellite manufacturers at a competitive disadvantage."

Lamborn included a provision in last year's National Defense Authorization Act that bans the procurement of satellite communication by the U.S. government if such systems use satellites or components designed or manufactured by China.

Dean Cheng, senior research fellow with the Asia Study Center at the Heritage Foundation, said China is filling global market needs for cheaper satellites. Countries like Nigeria, Bolivia and Venezuela are able to buy satellites "for a price that frankly no country can really compete with,” said Cheng. “The question is whether Intelsat and Eutelsat are going to necessarily buy a satellite from Boeing if the Chinese can offer a satellite of relatively comparable capability for a purely commercial purpose."

China also is poised to become a major player in the burgeoning small-satellite sector, Cheng said. "We expect to see the Chinese start moving into that arena. These are areas that will potentially constitute revolutionary capabilities and the Chinese recognize that it's important to play there."

The exploitation of data from space will be a booming business for China, he said. "The Chinese are almost certainly going to be offering data as they deploy constellations," Cheng added. "We should expect to see them offering data at very competitive rates, potential undercutting prices to a variety of users."

William Carter, a fellow at the technology policy program at the Center for Strategic and International Studies, said the United States’ best hope to stay ahead of China in space lies in the commercial sector. “There’s actually a huge amount of innovation happening in the United States in the private sector,” he said. The free market is “driving them to innovate and find ways to cut cost and deliver better capabilities,” Carter said. “So I think there may be room to do more to combat China … but I would also say that there’s probably more reason for optimism about the U.S. commercial space sector today than there has been in a while.”

Whereas in the past China has put more emphasis on legal and illegal acquisition of technology, it is now developing technology on its own, Cheng said, "which means both a reduced time lag and a greater ability of China to set the very terms of the technology debate."

When the Chinese talk about improving information gathering, he said, "We're not talking about just cyber, we are talking about space capabilities including countering potential adversaries through things like anti-satellite weapons as well as jamming."

Unlike the United States, China’s centralized government can more easily spin in private sector innovations into the military, noted Paul Scharre, senior fellow with the technology and national security program at the Center for a New American Security. China has set a goal to be the world leader in artificial intelligence by 2030 and will have major advantages in translating these private sector gains into national security applications.

Stefanik said these development should be a wakeup call for the U.S. government. For years partisan divisions have stalled federal funding for key technology programs and the appropriations process is essentially broken. "China's leadership appears to recognize the connection between the development of many of these advanced technologies and economic growth. This is something we should remind ourselves,"she said. "Perhaps it is a lesson we need to relearn amidst our debates on sequestration and continuing resolutions."

There is hope on Capitol Hill that the re-establishment of the undersecretary of defense for research and engineering will move the Pentagon’s technology efforts in a different direction. "I firmly believe that the undersecretary for R&E needs to be the prime mover to drive change and foster innovation within the department," said Stefanik.

The undersecretary for R&E will be in a "unique position to drive a national-level dialogue for science and technology policy," she noted. "So therefore we have significant expectations of Dr. Mike Griffin, the nominee to be undersecretary for research and engineering."

Stefanik insisted that the “threats we face from China and others demand that we energize and organize our government to ensure that policy keeps pace with technology.”