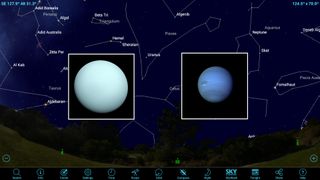 For the next several years, Uranus and Neptune will be conveniently positioned for observation during autumn and winter evenings. They are moving slowly in front of the stars in the constellations Pisces and Aquarius, respectively. These two distant planets are too small to locate without binoculars and telescopes. Sky-charting apps such as SkySafari 5 can help you find them.
(Image: © SkySafari App and NASA )

Uranus and Neptune are the third- and fourth-largest planets in our solar system, each about half the size of Saturn, or four times the size of Earth. But they orbit the sun at such extreme distances — 19 and 30 times the mean Earth-sun distance, respectively — that Uranus and Neptune exhibit disks that are tiny and dim when viewed from Earth.

Uranus and Neptune are composed of only 20 percent hydrogen by mass, compared with 90 percent for the gas-giant planets Jupiter and Saturn, so scientists now classify them as ice-giant planets. Their much higher bulk concentrations of heavier elements, and frozen gases such as water and methane, have given both planets distinctive and beautiful blue colorations.

The ice-giant planets weren't discovered until the invention of the telescope because they are not readily visible to unaided eyes. But with modern binoculars and backyard telescopes, you can see them for yourself, if you know where to look. Both Uranus and Neptune are conveniently placed for observation during evenings this fall. In this edition of Mobile Astronomy, we'll show you how to use your favorite mobile astronomy app to find them, and even see some of their moons! [The Brightest Planets in November's Night Sky: How to See Them (and When)]

Both Uranus and Neptune have orbits that are nearly parallel to the plane of the solar system. As a result, they are always within 2 degrees (about two finger widths) of the ecliptic and positioned within one of the zodiac constellations that encircle it.

Because it takes 84 Earth years for Uranus to complete an orbit of the sun (its year), the planet spends about seven Earth years in each constellation. This year, Uranus is in the dim constellation of Pisces, sitting between the two chains of stars that form the cords that link the two fishes.

Uranus entered Pisces in early 2009 and will not depart the constellation until early 2019. Pisces is in the evening sky from September to February annually. For the next several years, Uranus will be observable at convenient hours only during those months.

Normally, superior planets (the ones farther from the sun than Earth is) traverse the distant background stars from west to east (i.e., right to left for an observer in the Northern Hemisphere). But there is a period every year when the Earth overtakes each superior planet, passing it "on the inside track. During that time, due to the effects of parallax, a superior planet will appear to reverse direction, or loop backward — a phenomenon astronomers call retrograde motion. Later on, the superior planet resumes its regular eastward (or prograde) motion.

On Aug. 3, Uranus commenced a retrograde loop that will last until Jan. 3, 2018, after which it will appear to stop and then resume moving eastward. If you use your astronomy app to plot the path of Uranus in 2017 and 2018, the retrograde loop will be obvious. In the SkySafari 5 app, select Uranus, and in the Settings menu, select Solar System. Then, scroll down to the Selected Object Path option. The app will display the planet's path, labeled with dates every one to two months.

In late November 2017, Uranus rises in midafternoon and sets just before dawn, so it will already be climbing in the eastern sky after dusk. Because the planet is so distant, its disk appears tiny and dim; it's not visible to the naked eye, except under very dark skies. You'll want to wait until after twilight to look for it. It reaches peak visibility at about 10 p.m. local time, when it will hit its highest point, about halfway up the southern sky. Then, it will descend into the western half of the sky.

Because Uranus has a visual magnitude of 5.70, binoculars will allow you to see it, if you know where to look. Right now, Uranus is sitting 2.75 degrees to the right (west) of a star of medium brightness designated Omicron (ο) Piscium. (Some apps refer to that star as Torcularis Septentrionalis.) Roughly 3 degrees below the planet sits another modestly bright star named Mu (μ) Piscium. The two stars form the base of an isosceles triangle tipped slightly to the right, with Uranus at the peak. If you take note of the position of the planet and the two stars, you can see Uranus' retrograde motion westward over the following months.

In a telescope at low power, Uranus will appear as a pale blue-green dot. There will probably be some stars in the same field of view, but Uranus will not twinkle as much as the stars. At higher power, the planet should exhibit a small circular disk, whereas the stars will continue as pinpoints of light. Visually, it will not be possible to see the cloud bands around the planet, but skilled astrophotographers —using filters that pass green, red and near-infrared light — have imaged them.

Uranus has 27 known moons; a handful are within reach of large amateur telescopes. If the seeing conditions are very good, with transparent and steady air, you might catch a glimpse of one or more of them looking like tiny pinpricks of light next to the planet's disk. Uranus' axis of rotation is tilted by 98 degrees with respect to its orbit. This tipped-over configuration leads the moons' orbits to circle the planet like an archery target. (Eventually, Uranus' axis will point sideways to our line of sight, causing the moons' orbits to become edge-on to Earth for a few years, the way Jupiter's always appear.)

Uranus' moons are named for characters in William Shakespeare's "A Midsummer Night's Dream." The outermost moons Titania (visual magnitude 14.0) and Oberon (magnitude 14.1) orbit far enough away to escape the glare of the planet's disk — lower magnitudes are brighter. Ariel (magnitude 14.3) and Umbriel (magnitude 15.0) are much harder to see because they are inherently dimmer and closer in. A 12-inch or larger scope is needed to see them. The dimmest and closest moon, Miranda (magnitude 15.8), is visible only in very large telescopes.

If you think you are seeing Uranus' moons in your telescope, you can confirm it using SkySafari 5 or your favorite sky-charting app. Center the planet and zoom the display until the planet and moons are visible. Note the moons' positions with respect to the planet, and compare that info with what the telescope is showing. Don't forget to account for any image mirroring or flipping that your telescope may introduce. Tapping the upper-right corner of the SkySafari 5 app's display will open flipping buttons. Most backyard refractors will require the horizontal flip option. (Don't forget to disable this setting later.) [Best Telescopes for the Money - 2017 Reviews and Guide]

Neptune is slightly smaller than Uranus in diameter, but it's actually a bit more massive. It is located more than 50 percent farther away from the sun than Uranus is and, with a visual magnitude of 7.95, is only about one-eighth as bright as Uranus. It is a challenging planet to find but a beautiful sight to capture in telescopes.

Neptune takes 165 Earth years to complete one orbit of the sun, so it needs about 14 Earth years to traverse each constellation. It entered Aquarius in the spring of 2010 and will not depart the constellation until the end of 2023. Aquarius is in the evening sky from August through January annually, so for the next several years, Neptune will be observable at convenient hours only during late summer and early winter.

In late November 2017, Neptune rises at noon and sets at about 1 a.m. local time, putting it 35 degrees above the southeastern horizon after dusk. The planet will be even dimmer than Uranus, so skywatchers should wait until complete darkness to look for it. It reaches peak elevation and visibility, in the south, at about 7:30 p.m. local time, before descending in the western sky and setting soon after midnight.

Strong binoculars might offer enough magnification to see Neptune, but a telescope is the better bet. Luckily, this year, we have a very good guide star to aid in finding the planet. Neptune is sitting only 0.65 degrees (or about 1.5 apparent moon diameters) below a fairly bright star named Hydor (also designated Lambda Aquarii). The planet is moving retrograde (west) until Nov. 22, after which it will resume its regular eastward motion. (Remember that the constellations tilt as they are carried across the night sky. So, by late evening, Neptune will rotate to sit to the lower left of Hydor.)

In a telescope at low power, Neptune will be little more than a tiny blue dot hardly distinguishable from the stars in the same field of view. As with Uranus, Neptune will not twinkle as much as the stars. But higher powers of magnification should reveal its tiny, circular disk sporting a beautiful deep-blue color.

Triton is the only one of Neptune's 14 known moons within reach of very large amateur telescopes. With a visual magnitude of 13.50, it is brighter than any of Uranus' moons — probably because of its reflective icy crust. The moon is relatively close to the planet, so use your app to tell you which angle around the planet to look for it.

Observing Neptune is indeed a rewarding challenge. Not surprisingly, even many seasoned skywatchers won't see it until they gain access to an advanced GoTo telescope — or a friend with a large-aperture telescope! With some clear, dark November skies and the help of your sky-charting app, you should now be ready for your search for the ice giants. [Moons of Neptune: Giant Blue Planet's 14 Satellites Unmasked (Infographic)]

While you are observing Neptune, take a moment to contemplate the patch of sky located just 4 degrees (or about four finger widths) to the upper left of Hydor. This is where the famous TRAPPIST-1 planetary system is located. The ultracool red dwarf star (visual magnitude 18.80) and its retinue of seven Earth-size planets are far too dim to see, even in a very large telescope. But it's exciting to think that at least three of those exoplanets, located only 39.5 light-years from Earth, exist in the star's habitable zone and may have surface water — or primitive extraterrestrial life!

The TRAPPIST-1 website, edited by members of the discovery team, contains scientific information about the system, in both written and graphical form; the latest science news about the star and planets; a historical timeline; and artistic and educational material inspired by the discovery.

In the next edition of Mobile Astronomy, we'll resume our full-moon-observing discussion, including how to spot smaller lunar features through a telescope. In the meantime, keep looking up!

Editor's note: Chris Vaughan is an astronomy public outreach and education specialist at AstroGeo, a member of the Royal Astronomical Society of Canada, and an operator of the historic 74-inch (1.88-meter) David Dunlap Observatory telescope. You can reach him via email, and follow him on Twitter @astrogeoguy, Facebook and Tumblr.