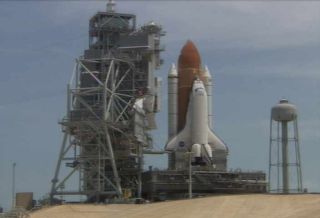 The space shuttle Atlantis stands poised atop Launch Pad 39A at NASA's Kennedy Space Center in this view from nearby cameras after a five hour, 45-minute return trip that began at 5:02 a.m. EDT on May 15, 2007.
(Image: © NASA/KSC.)

The spaceshuttle Atlantis is back at the launch pad after more than two months of extensivefuel tank repairs as NASA primes the spacecraft for a June 8 launch towards theInternational Space Station (ISS).

Atlantisbegan rolling toward Pad 39A at NASA's Kennedy Space Center (KSC) at CapeCanaveral, Florida at 5:02 a.m. EDT (0902 GMT), making the 3.4-mile(six-kilometer) trip from its cavernous Vehicle Assembly Building to the launchsite in just under seven hours.

"It's areal success story, almost bordering on an Apollo 13-type story to develop thatin such a short time," Chapman said Friday, referring to NASA's Apollo 13 Moonshot in 1970, when engineers on Earth worked furiously to improvise fixes andreturn its three-astronaut crew home after an oxygen tank exploded. "I promiseyou, it is absolutely ready to go," he said of Atlantis' fuel tank.

NASA haskept close watch on shuttle fuel tank foam since 2003, when a piece ofinsulation broke free from the Columbia orbiter's tank during launch andbreached the spacecraft's left wing-mounted heat shield. The damage led to the loss of the orbiter and itsseven-astronaut crew as they reentered the Earth's atmosphere.

"I am justin awe of the team that's pulled this together," NASA launch director MichaelLeinbach said Friday. "I will never forget the day of the storm. I was reallywondering if we were going to fix this tank or not."

Commandedby veteran shuttle flyer Rick Sturckow, Atlantis' STS-117 mission will delivertwo new 17.5-ton truss segments and starboard solar arrays to the ISS in whatis slated to be the first of up to four shuttle flights this year for NASA. Theadditional solar arrays are vital for the addition of internationallaboratories built by Europe, Japan and Russia to the space station.

Atlantis'11-day mission will also feature an astronaut swap for the space station'sExpedition 15 crew, with NASAspaceflyer Clayton Anderson -- a late addition to the STS-117 crew -- torelieve flight engineer Sunita Williams aboard the orbital laboratory.

"It's justan outstanding effort on the part of hundreds and hundreds of people," NASAshuttle program manager Wayne Hale said last week of the fuel tank repair. "[We're]looking forward to a good launch on June 8."