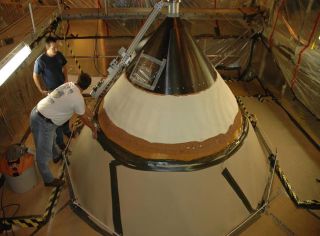 In NASA Kennedy Space Center's Vehicle Assembly Building, technicians are inspecting the sanding performed on Atlantis' nose cone to repair hail damage. The equipment on the side of the nose cone is the sander.
(Image: © NASA/Jack Pfaller.)

Aftermonths of unprecedented repairs, the ding-ridden fuel tank of NASA's space shuttleAtlantis is patched up and primed for a planned June 8 launch, top agencyofficials said Friday.

"I'm reallypleased to say that we have effectively completed the repairs on the externaltank," Wayne Hale, NASA's shuttle program manager, told reporters in ateleconference.

Atlantis isslated to launch no earlier than June 8, and is due to return to the launch padat 4:00 a.m. EDT (080 GMT) on May 16, NASA officials said. The shuttle couldleave its makeshift repair site -- NASA's cavernous Vehicle Assembly Building atKSC -- a day early if scaffoldings are removed in time over the weekend, theyadded.

"As you canimagine, it's going to look pretty speckle-y," John Chapman, NASA's external tankproject manager, told reporters during the briefing. "It's kind of like havinga car that has had body and fender work, but hasn't had the primer work...you'reeye has trouble recognizing that it's going to be nice and smooth."

All teststo date have found the fixes sound for NASA's upcoming shuttle flight, thoughthe sheer scope of the repair work does add some risk to the upcoming launch, missionmanagers said.

"There is,at least mathematically, some small increase in risk," Hale said. "But our workindicates that that is a very small-to-nonexistent increase to the potentialfor damage."

NASA haskept a close eye on shuttle fuel tank foam and made a series of improvementssince the 2003 Columbiaaccident, in which an errant chunk of insulation tore free from its tankduring liftoff and struck the orbiter's heat shield, leading to loss of thespacecraft and its seven-astronaut crew during their return to Earth.

The ISSconstruction flight was initially headed for a March 15 launch target when afreak storm pelted the orbiter and its fuel tank with hail the size of golfballs on Feb. 26. The hailstones gouged some 4,200 divots into the vital foaminsulation coating Atlantis' fuel tank, prompting almost three months of delaysto make repairs.

"This teamhas been essentially working 24/7 since the storm doing engineering analysis,testing and repair of the tank," Chapman said. "This has truly been unique. We'vehad hail damage before, but never to this magnitude."

Repaircrews stripped away whole sections around the fuel tanks nose cap, where hail hadgouged about 1,400 divots into the foam surface, then sprayed the area with newinsulation, NASA said. Nearly 2,800 other small dings were repaired with avariety of other methods.

"Each andevery one of those sites required detailed engineering analysis anddisposition," Chapman said.

To do that,engineers pelted samples of shuttle fuel tank foam with steel balls to simulatehail damage, then patched them up and tested them in a hot gas chamber toensure the fixes were safe for Atlantis' actual tank.

Hale laudedthe efforts of NASA engineers and contractors from across the agency for theirability to focus given a tumultuous few months that have seen a former astronautarrested, freak storms, a shooting at the agency's Johnson Space Center inHouston and most recently twoconsecutive train derailments that plagued a shipment of shuttle rocketbooster segments to KSC.

"They haveshown real American grit in the face of adversity," Hale said.