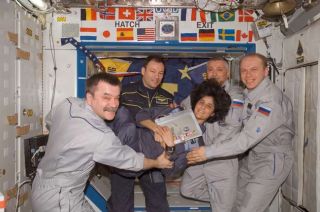 Americanastronaut Sunita Williams will return home from her mission to theInternational Space Station (ISS) a bit early this summer due to delays associated withNASA's next shuttle flight, the space agency announced Thursday.

Williams,41, first arrived at the ISS in December 2006 during its then-Expedition 14mission and stayed on this month for the beginning of Expedition 15. She andAnderson wereinitially expected to swap places during NASA's STS-118 shuttle flight aboardthe shuttle Endeavour in late June.

Butthat mission was rescheduled to no earlier than Aug. 9 following a string ofdelays caused by hail-spawned fuel tank damage that prevented an initial March15 launch of Atlantis' STS-117 mission. Atlantis is now setto launch towards the ISS no earlier than June 8.

AU.S. Navy commander making her first spaceflight, Williams has repeatedly saidthat she was prepared to return home early or late depending on what ISS missionmanagers saw as the best move for the station. Earlier today, she told reportersthat she and her family had weathered similar experiences during her longdeployments abroad with the Navy.

While Williamsis returning to Earth on an earlier shuttle flight, she will be spending about thesame amount of time in space - just over six months - as originally planned, NASA spokesperson Kylie Clem told SPACE.com Thursday.

ReturningWilliams to Earth in June does add some additional complexity to an alreadytricky space station construction flight.

"When yourotate a crewmember, there's a significant amount of upmass in addition to thatparticular crewmember," Kirk Shireman, NASA's deputy ISS program manager at theagency's Houston-based Johnson Space Center, said last month. "There's theirequipment, their [spacesuit], they have to have a special seat to fly home onthe Soyuz...adding that additional mass is a hit, and adding handover activitiesis a timeline hit."

Butafter a detailed review Thursday morning, ISS mission managers decided theycould in fact include the Expedition 15 astronaut crew swap during the STS-117mission with no impact to shuttle of station mission objectives, Clem said.

Clayton,a 48-year-old native of Omaha, Nebraska, will make his first spaceflight duringExpedition 15 and was slated to participate in the spacewalks planned for theSTS-118 mission.

"Hewill continue to train for that because he will still be on station," Clem said.

Waitinguntil August's STS-118 mission would have extended Williams' spaceflight by atleast one month and given her the U.S. record for longest continuousspaceflight, which is currently held by her former crewmate - Expeditioncommander Michael Lopez-Alegria - whospent 215 days in orbit before returning to Earth on April 21.

Instead,Williams will return to Earth no earlier than June 19 after turning herExpedition 15 duties over to Anderson. Anderson, in turn, will be replaced byNASA astronaut Daniel Tani during the planned STS-120 shuttle mission to launchno earlier than Oct. 20. She currently holds the title for most spacewalks andspacewalking time - 29 hours and 17 minutes over four excursions - for a femaleastronaut.

Clemsaid Williams is now expected to spend about 192 days in space by her mission'send, which would set a new record for the longest single spaceflight by afemale astronaut.

Thecurrent single-mission record by a female spaceflyer is held by NASA astronautShannon Lucid, who spent 188 days in orbit during a 1996 mission to Russia'sSpace Station Mir.