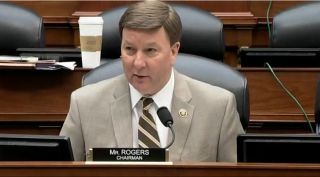 WASHINGTON — Lawmakers on Tuesday took the first step towards establishing a 'Space Corps' within the Air Force — similar to the way the Marine Corps functions in the Navy — by drafting legislation that would require the new organization to be set up by January 1, 2019.

As the House Armed Services Committee prepares to vote on the National Defense Authorization Act (NDAA), the strategic forces subcommittee — which oversees military space matters — released its proposed additions to the bill. The subcommittee has scheduled a formal legislative mark-up session for its portions of the bill on Thursday.

"There is bipartisan acknowledgement that the strategic advantages we derive from our national security space systems are eroding," Rogers and Cooper said in a prepared statement. "We are convinced that the Department of Defense is unable to take the measures necessary to address these challenges effectively and decisively, or even recognize the nature and scale of its problems."

The Space Corp would be led by its own chief, who would sit on the Joint Chiefs of Staff with a six-year term, the bill says. It would be a position equal to the Chief of Staff of the Air Force, and would answer to the Secretary of the Air Force.

The subcommittee's markup of the bill would also set up a U.S. Space Command that would be a sub-unified command under U.S. Strategic Command, a move lawmakers hope would improve the integration of space operations in warfighting.

The subcommittee's action on the NDAA is one of the early steps in a lengthy legislative process. The bill would still need to get approval from the full committee before it could be debated by the House, but the chamber isn't expected to vote on the NDAA until after the Fourth of July holiday. The legislation would also need to pass the Senate, which is working on a defense authorization bill of its own. The House and Senate must pass identical bills before sending the legislation to the White House to be signed into law by the president.

The Senate Armed Services Committee is not scheduled to hold its full markup of the NDAA until June 28.

Current Air Force leadership opposes setting up a Space Corps. Appearing before the Senate Armed Services Committee in May, Chief of Staff Gen. David Goldfein said he believes the move would only cause confusion.

"I don't support it at this time," the general said. "Right now, to get focused on a large organizational change would actually slow us down…Whether there's a time in our future where we want to take a look at this again, I would say that we keep that dialog open, but right now I think it would actually move us backwards."

"I could not agree more that now is the time to address the threats our nation faces in space, which is why the Air Force has proposed a 20 percent increase in space funding in this year's budget, and announced last week a reorganization that integrates, elevates and normalizes space," the secretary said.