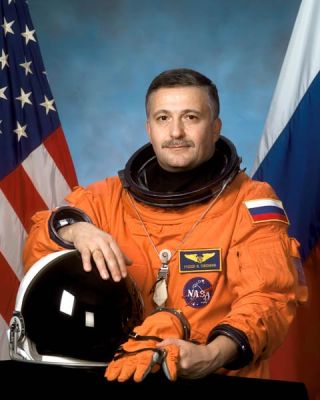 EDUCATION: After graduation from high schoolin Batumi in 1976, he entered the Moscow Aviation Institute named after SergeyOrdzhonikidze. He finished studying in 1983, and is qualified as a mechanicalengineer, specializing in airspace vehicles. In 2001, he graduated from theMoscow Service State University with a Ph.D. in economics.

EXPERIENCE: Since graduating from the S.Ordzhonikidze Moscow Aviation Institute in 1983, Yurchikhin has worked at theRussian Space Corporation Energia. He began working as a controller in theRussian Mission Control Center, and held the positions of engineer, seniorengineer, and lead engineer, eventually becoming a lead engineer for Shuttle-Mirand NASA-Mir Programs.

In August 1997, he was enrolled in the RSC Energiacosmonaut detachment as a cosmonaut-candidate.

In October 2002, FyodorYurchikhin flew aboard STS-112. In completing his first space flight he haslogged a total of 10 days, 19 hours, and 58 minutes in space.

Fyodor Yurchikhin is assigned to command the Expedition-15mission to the InternationalSpace Station, arriving at the complex aboard a Soyuz spacecraft scheduledto launch in April 2007, for a six month tour of duty aboard the Station.

SPACE FLIGHT EXPERIENCE: STS-112Atlantis (October 7-18, 2002) launched from and returned to land at theKennedy Space Center, Florida. STS-112 was an International SpaceStation assembly mission during which the crew conductedjoint operations with the Expedition-5by delivering and installing the S-One Truss(the third piece of the station's 11-piece Integrated Truss Structure).

Three spacewalks were required to outfit and activatethe new component. The crew also transferred cargo between the two vehicles andused the shuttle's thruster jets during two maneuvers to raise the station'sorbit. STS-112 was the first shuttle mission to use a camera on the ExternalTank, providing a live view of the launch to flight controllers and NASA TVviewers. The STS-112 mission was accomplished in 170 orbits, traveling 4.5million miles in 10 days, 19 hours, and 58 minutes.