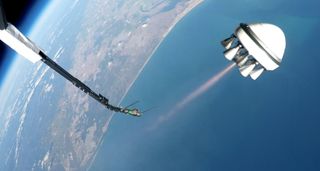 A Zero 2 Infinity Bloostar rocket prototype launches from a high-altitude balloon, itself flying 25 kilometers above Earth, during a test flight on March 1, 2017.
(Image: © Zero 2 Infinity)

During the test, conducted March 1 from a vessel a few kilometers off Spain's coast, a stratospheric balloon lifted the Bloostar vehicle to a 25-kilometer altitude before its vacuum-optimized engine ignited.

Designed to carry small satellites to low-Earth orbit, Bloostar is a three-stage vehicle (not counting the balloon) equipped with rocket engines that burn a mixture of liquid oxygen and methane. During a standard mission, Bloostar's balloon will carry it above an estimated 95 percent of the atmosphere before its propulsion stages activate, enabling it to deliver a 75-kilogram satellite to a 600-kilometer sun-synchronous orbit.

Zero 2 Infinity CEO Jose Mariano Lopez Urdiales, who sometimes refers to the hybrid vehicle as a "rockoon," told SpaceNews that Bloostar's rockets only fired for a few seconds during the March 1 test; reaching a high apogee was not a goal. Zero 2 Infinity has a series of tests planned both on the ground and at near-space altitudes between 20 and 100 kilometers going forward.

"This was a very early test, but we were happy with the results and it's an important step moving from computer graphics and engineering and calculations to actual hardware," he said.

Zero 2 Infinity started on Bloostar in 2013. The company has been deploying high-altitude balloons for about seven years, but made a move into the launch sector when demand for small satellites increased. Zero 2 Infinity also has a program called Bloon for passenger-carrying balloon trips to near space, but Lopez Urdiales said the company is currently focusing on Bloostar.

Lopez Urdiales said Bloostar fired only one engine of its seven engines during the March 1 test. The final version of the vehicle, he said, will carry 13 engines — six on the first stage, six on the second stage and one on the third stage.

"We have a long list of test flights that we need to perform," he said. "Our next big milestone will be crossing the Karman line with a 'rockoon,' with a rocket being launched from a balloon." The Karman line, a point 100 kilometers above sea level, marks the boundary between Earth's atmosphere and space.

Lopez Urdiales said recovering the prototype after its March 1 launch allows Zero 2 Infinity to retrieve onboard SIM cards containing a bigger trove of flight data than what the vehicle sent back through telemetry. The recovery is also an important step for reusability which, while not part of Zero 2 Infinity's main business plan, is factored into Bloostar's design.

Zero 2 Infinity says it has letters of intent worth a total of 250 million euros ($266.4 million) from customers that want to launch with Bloostar. Lopez Urdiales said the launcher's development is financed through a combination of outside investment and revenue generated from Zero 2 Infinity's existing balloon business.

Ultra Magic, a hot air balloon manufacturer, is an industrial investor in Bloostar, though Zero 2 Infinity doesn't purchase its balloons from them. Lopez Urdiales said Ultra Magic is more interested in the propulsion technology side of Bloostar.

Zero 2 Infinity plans to have its first commercial Bloostar launch in 2019, Lopez Urdiales said, after a final test campaign of four rockoon launches that year. Lopez Urdiales said the company wants a minimum of one successful full demonstration mission out of the four before launching with customer payloads.

Lopez Urdiales said Zero 2 Infinity recently created a subsidiary in the United States, and might do some test flights from U.S. ranges out over the sea. The majority of tests though, will be in Europe, he said.