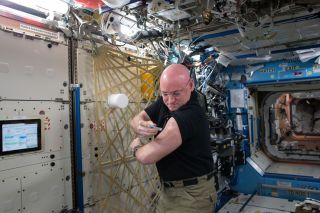 NASA's requirements for becoming an astronaut are stringent, but not overly daunting. Essentially, hopefuls must have a bachelor's degree in science, be physically fit, and stand between 58.5 and 76 inches tall. What NASA doesn't mention, however, are the intangibles. You can probably think of a few: coolness under pressure, a problem-solving mentality, and the ability to work in a team setting. But one trait you might not consider is a strong stomach. The following stories illustrate why that definitely can come in handy.

The microgravity of space can lead to a lot of disgusting situations. If you think carpet spills are hard to clean, try collecting floating vomit, or desiccated skin.

"The calluses on your feet in space will eventually fall off," astronaut Scott Kelly revealed in a Reddit AMA. "So, the bottoms of your feet become very soft like newborn baby feet. But the top of my feet develop rough alligator skin because I use the top of my feet to get around here on space station when using foot rails."

Floating calluses with the potential to enter an unaware, open mouth is enough to irk most people, but that's not the worst of it. Take what happened during STS-1, for example.

In April 1981, astronauts John Young and Robert Crippen piloted the Space Shuttle Columbia successfully through its maiden mission, but not without a few hitches. The toilet clogged early on, forcing the two crewmembers to use fecal containment systems, long, tube-shaped bags affixed to the buttocks with a sticky seal to trap, and store, evacuated feces. Even worse, during re-entry, vacuum-dried fecal matter from the broken, bloated toilet migrated to the ventilation system and entered the main cabin. Young and Crippen survived the poop particles and soldiered through the *ick* factor in professional fashion.

Fecal containment systems were a brief inconvenience during STS-1, but they were business as usual during the Apollo missions. The clunky apparatuses were far from foolproof, especially in microgravity. During Apollo 10, when Tom Stafford, Gene Cernan, and John Young orbited the Moon, it seems a few "turds" may have eluded containment. Alan Boyle uncovered the smelly situation whilst reviewing the declassified mission logs, and brought it to light over at NBC's Cosmic Log:

Thanks to futuristic vacuum toilets and well-designed filtration systems, escaped turds are no longer an issue. In fact, the International Space Station is "many, many times cleaner than your bathroom at home," Astrobiologist Kasthuri Venkateswaran, told the Washington Post.

Good news for aspiring astronauts who are easily grossed out!