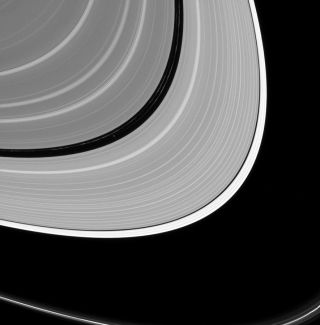 A speck of a moon makes big waves in a new image of Saturn's rings taken by the Cassini spacecraft.

Captured July 2, 2016, the image shows Saturn's moon Pan inside the Encke gap, a 200-mile-wide (325 kilometers) space held open by the moon's orbit. Because the gravitational forces of Pan sweep most particles out of the gap, the moon is known as a "shepherd." The thin white lines seen in the gap are ringlets, mini-rings made of particles that Pan doesn't kick out of the gap, but does affect its orbit. [Latest Saturn Photos from Cassini's Orbiter]

Pan is only about 12 miles (20 kilometers) in diameter. Astronomers first inferred this tiny satellite's presence from gravitational disturbances captured by the Voyager program, which began in 1977, sending two spacecraft to the furthest reaches of the solar system. (Voyager has kept on chugging past that original mission: In 2013, NASA reported that the Voyager 1 spacecraft had become the first manmade object to make it tointersteller space, outside the bounds of the solar system.)

It wasn't until 1991, however, that scientists reported visual confirmation of Pan. Writing in the journal Nature, Mark Showalter, then of Stanford University, discovered that the moon was visible as a speck in images taken by the Voyager mission. Cassini's views are sharper: This image was taken by the spacecraft's narrow-angle camera in visible light when the spacecraft was about 840,000 miles (1.4 million km) from Saturn, according to NASA. Even so, Pan has been brightened by a factor of two so that it stands out against the dark of the Encke gap.

The Cassini mission is a partnership of NASA, the European Space Agency and the Italian Space Agency. The spacecraft launched in 1997, carrying a probe called Huygens that landed on Titan, Saturn's largest satellite, in 2005. Cassini continues to orbit Saturn. Later this year, NASA plans to send the spacecraft into a set of orbits the agency is calling the Grand Finale, which will send Cassini circling the planet's poles just outside the outermost ring. The spacecraft will then shoot the gap between the innermost ring and the planet's atmosphere to measure Saturn's gravitational fields and even sample its outer atmosphere.