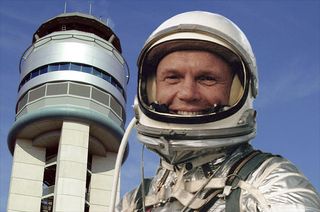 The United States' second international airport to be named for a NASA astronaut honors the first American to orbit the Earth.

Ohio lawmakers on Wednesday (May 25) voted to rename the Port Columbus International Airport for astronaut John Glenn. The last surviving member of the original Mercury 7 pilots, Glenn became the first U.S. space explorer to circle the planet on Feb. 20, 1962.

"I believe it is only fitting to rename the [airport] after John Glenn for his countless contributions to space exploration and to Ohio's rich aviation history," said the Speaker of the Ohio House of Representatives, Clifford Rosenberger, in a statement. "There is no doubt that he is an American hero, and I'm honored that we are taking steps to further secure his legacy here in our great state." [Photos: John Glenn, First American in Orbit]

Glenn, now 94, was born in 1921 in Cambridge, Ohio, and earned his Bachelor of Science degree in engineering at Muskingum College in New Concord, his hometown. After serving in the Marine Corps and making history on board NASA's Friendship 7 orbital mission, he was elected to the U.S. Senate, representing Ohio as a Democrat from 1974 until 1999.

In October 1998, Glenn returned to orbit aboard the space shuttle Discovery, setting a record as the oldest person to fly into space at age 77.

Over the course of his two spaceflights, separated by 36 years, Glenn logged 9 days off Earth and completed 138 orbits — three aboard his Mercury capsule and 135 on the space shuttle.

The Columbus airport's renaming is the latest honor for the astronaut in his home state.

In 1999, NASA renamed its Cleveland facility the John H. Glenn Research Center, and since 2006, the public policy and management school (now college) at The Ohio State University has borne his name.

Senator John Glenn Highway runs along Interstate 480 in Cleveland across from the NASA research center and the Colonel Glenn Highway runs by Dayton's Wright-Patterson Air Force Base. A high school with his name stands in New Concord and, until it was demolished last year, John Glenn Elementary stood in Seven Hills.

The newly-renamed Port Columbus airport was opened in 1929 as a stop on the first transcontinental air/rail service from New York to the West coast. Jet airline service began at the airport in 1961. Four years later, the airport gained its international status with the opening of a U.S. Customs facility.

The nation's first international airport to bear an astronaut's name, the Rick Husband Amarillo International Airport in Texas, was renamed for the final commander of the space shuttle Columbia in 2003.