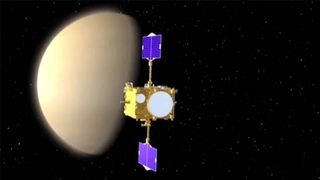 Venus has been billed as Earth's twin, but a new Japanese mission will find out why the two planets remain so very different.

More Information on the Planet Venus

The second planet from the sun bakes under twice as much solar radiation as Earth and reaches temperatures of 895 degrees Fahrenheit (480 degrees Celsius). Pressure from the dense atmosphere of sulfuric acid gas is about 95 times greater than Earth's and would crush a human.

The thick cloud cover around Venus rotates much faster than the planet itself — once every four days. After the moon, Venus is the brightest object in the sky.

The surface of Venus is mostly a rocky desert (this computer-generated view shows lava flows around Sif Mons). Like Mercury, Earth and Mars, Venus is composed of mostly rock and metal.

The Greeks believed Venus was two separate objects — one in the morning sky and another in the evening. Because it is often brighter than any other object in the sky — except for the sun and moon — Venus has generated many UFO reports.

While all of the planets orbit in an ellipse, Venus' orbit is the closest to a perfect circle. It is the only planet in the solar system whose day (241 Earth days) is longer than its year (225 Earth days).