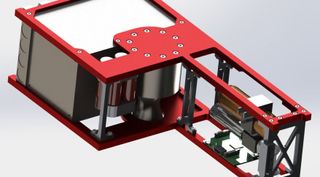 WASHINGTON — Five teams, ranging from university students to a group of engineers dispersed across the country, received $20,000 each from NASA in the first milestone of a competition to develop deep space cubesat technologies.

The teams, announced by NASA at a Sept. 9 briefing, had the highest scores in the first of four "ground tournaments" that make up the initial phase of the agency's $5 million Cube Quest Challenge. That tournament, held in early August, featured 13 teams who presented their initial spacecraft designs.

"Cube Quest is an opportunity for non-government cubesat developers and builders to compete in lunar orbit and deep space for accomplishments in communications, navigation and longevity," said Jim Cockrell of NASA's Ames Research Center. Cockrell is manager of the competition, part of the agency's Centennial Challenges prize program. [Tiny Satellites Launched from Space Station (Photos)]

The ground tournaments are optional elements of the overall competition, intended to guide teams through the development of their spacecraft as they mature from initial concepts to flight hardware. Participating teams are scored on how well they meet the requirements of each tournament, and the three with the highest cumulative scores will win flights of their spacecraft as secondary payloads on the first Space Launch System mission, Exploration Mission 1 (EM-1), in 2018.

The first ground tournament did not involve any hardware, and Cockrell likened it to a mission concept review that takes place early in the development of a typical NASA mission. Judges assessed the capabilities of each proposed mission and compliance with mission rules and SLS safety requirements.

"It was the first opportunity for teams to present their concepts for how they intend to win the Cube Quest Challenge," he said. "Ground Tournament 1 demonstrates that teams are on a good trajectory for launch on EM-1."

Some of the winning teams are linked to universities that have experience with cubesats. A space systems design class at the Massachusetts Institute of Technology started work on the KitCube spacecraft this spring, said Kerri Cahoy, a professor of aeronautics and astronautics there. KitCube is designed to go into lunar orbit and demonstrate a laser communications system.

Another team, Cislunar Explorers, is composed mostly of students at Cornell University. "The work represents the culmination of lots of Ph.D.-level research and some undergraduate research from the last five or six years at the university," said Mason Peck, a Cornell engineering professor who served as NASA chief technologist from 2011 to 2013.

Peck said their spacecraft will demonstrate several key technologies, including a propulsion system that uses solar power to convert water into hydrogen and oxygen propellants. "It's a pathfinder for the sustainable exploration and settlement of the solar system," he said.

Other winning teams have less traditional backgrounds. "There's 12 of us across the United States" working on Team Miles, said team leader Wes Faler. Many of them are located in Tampa, Florida, including Faler, but others are based in California, New York and South Carolina.

Faler said the team takes its name from a line in a Robert Frost poem: "And miles to go before I sleep." After going into orbit around the Moon, he said, the spacecraft will perform an extended mission, traveling towards Mars to test autonomous navigation technology.

Novel Engineering of Cocoa Beach, Florida, is working with several other local companies, including Craig Technologies and Harris Corp., the latter providing a deployable mesh antenna for its cubesat, named Space Pig. The name, team members said, came from elementary school students during an outreach event.

The ultimate goal of the competition is to fly cubesats into lunar orbit or deep space. A total of $3 million is offered in prizes for the "Lunar Derby" part of the competition, for both being able to enter lunar orbit and to demonstrate communications capabilities and longevity. An additional $1.5 million is for a "Deep Space Derby" to achieve communications and longevity goals.

NASA's Cockrell said the next ground tournament is scheduled for early 2016. Teams can participate in that round, which he compared to a preliminary design review, regardless of their performance, or even participation, in the August tournament.

Teams that do not participate in the ground tournaments, or who do not finish in the top three in total points, can still pursue the deep space and lunar prizes by arranging their own launches. The competition ends, and any prizes awarded, one year after the EM-1 launch.