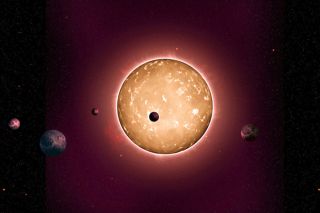 Can life survive for billions of years longer than the expected timeline on Earth?

As scientists discover older and older solar systems, it's likely that before long we'll find an ancient planet in the habitable zone. Knowing if life is possible on this exoplanet would have immense implications for habitability and the development of ancient life, one researcher says.

In January, a group led by Tiago Campante — an astroseismology or "starquake" researcher at the University of Birmingham in the United Kingdom — announced the discovery of five tiny, likely rocky worlds close to an ancient star. The star is named Kepler-444 after NASA's planet-hunting Kepler mission, which first made a tentative discovery. [10 Exoplanets That Could Host Alien Life ]

Campante's contribution was narrowing down the age of Kepler-444 and its planets to an astounding 11.2 billion years old. That's nearly 2.5 times as old as our solar system. None of Kepler-444's planets are thought to be habitable, as they circle the star at a scorchingly close distance. However, Campante said that finding those planets is a great stride forward in the search for older, habitable worlds, and the best may be yet to come.

"This system gives us hope that there are other habitable worlds that we can’t detect because we don’t have enough observing timespan yet," Campante said.

Upcoming observatories could change that, he added. Whether life can live for billions of years, however, is pure speculation.

"If intelligent life develops in a system as old as this one, would it still exist or would they extinguish themselves?" Campante asked.

Results from Campante's paper were published in January in The Astrophysical Journal, in a paper entitled, "An Ancient Extrasolar System with Five Sub-Earth-Size Planets."

The researchers observed Kepler-444 with the W.M. Keck telescope near the summit of Mauna Kea, Hawaii to learn more about its chemical composition.

The star is deficient in iron but is rich in what are called "alpha elements," such as silicon, carbon, nitrogen and oxygen. These elements were all formed in the first stellar explosions of our universe, when older stars ran out of fuel to burn and spread these elements far and wide. These elements make the composition of the star's orbiting planets a bit of a surprise, Campante said.

Normally, scientists expect that "terrestrial" planets — rocky ones such as Mercury, Venus or Earth —  have lots of iron in their interiors. This discovery shows it's also possible to create planets that are primarily made of alpha elements, he said. This means that rocky planets may be able to form in multiple ways, making them more common across the universe.

The Kepler-444 system is not much like ours, though. Kepler-444 is slightly smaller than our sun, and its planets orbit extremely close in. The habitable zone in this system starts around 0.4 astronomical units (AU), or Earth-sun distances. Yet the outermost planet huddles at only 0.08 AU. That's roughly five times closer than Mercury is to our own sun.

There are few known solar systems that are as old as Kepler-444. One huge gas giant planet informally known as "Methuselah" was discovered in the early 2000s. When the finding was announced in 2003, astronomers said the planet was roughly 12.7 billion years old, more than twice Earth's age. (Our solar system formed about 4.5 billion years ago.)

Last year, astronomers said they had found two planets orbiting the 11.5-billion-year-old Kapteyn’s Star, which is named after a Dutch astronomer. Both Kapteyn b and c are likely of a size between super-Earths and mini-Neptunes, Campante said.

Another ancient solar system was found orbiting Kepler-10, which is roughly 10.6 billion years old, but the two planets were also not considered to be habitable. At the time of their discovery in 2011, the researchers described the planets as "a hot rocky world and a solid Neptune-mass planet."

It will take more powerful observatories to find more Earth-like worlds, Campante said, but luckily two are on their way shortly. NASA plans to launch the Transiting Exoplanet Survey Satellite (TESS) in 2017, and the European Space Agency will send PLATO (PLAnetary Transits and Oscillations of Stars) up in 2024. Campante is involved in the planning of PLATO.

Like Kepler, PLATO will search for Earth-like worlds around sun-like stars, but it will sport a wider field of view and a more sensitive receiver. Both features could potentially detect more worlds, Campante said. TESS, meanwhile, will focus on stars closer to Earth, making them easier to track with ground-based observatories.