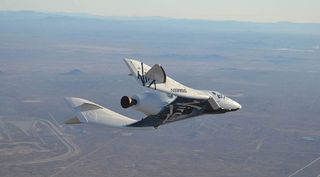 The SPACE Act would extend the "learning period" limiting the FAA’s ability to regulate the safety of people flying on commercial spacecraft like SpaceShipTwo through 2025, an extension some House Democrats argued is too long.
(Image: © Virgin Galactic)

WASHINGTON — The U.S. House of Representatives passed a bill with a number of commercial space policy provisions May 21, despite objections from some Democratic members about the bill's language and warnings that the Senate is unlikely to adopt it.

The House passed H.R. 2262, the Spurring Private Aerospace Competitiveness and Entrepreneurship (SPACE) Act, on a 284–133 vote after nearly two hours of debate. Nearly 50 Democrats joined almost all the chamber's Republicans in voting for the bill.

The act combines four commercial space bills approved by the House Science Committee in a May 13 markup. The cornerstone of the bill is a section dealing with commercial launch issues, including extending the "learning period" limiting safety regulations for people flying on commercial spacecraft, and indemnification for third-party damages from commercial launches, through 2025.

"This bill is the future of space," said Rep. Lamar Smith (R-Texas), chairman of the House Science Committee, during floor debate of H.R. 2262. The bill, he said, "facilitates a pro-growth environment for the developing commercial space sector."

Other members argued that provisions of the bill went too far. "H.R. 2262 is an unbalanced bill that simply doesn't adequately protect the public's interest," said Rep. Donna Edwards (D-Md.), ranking member of the House Science Committee's space subcommittee, who led the debate against the bill.

Edwards specifically mentioned the bill's extension of the regulatory learning period, as well as requiring spaceflight participants to sign cross-waivers of liability with launch providers. The bill, she said, "puts policy in place that favors industry over policy that ensures balanced consideration for those people the industry will serve."

She and Rep. Eddie Bernice Johnson (D-Texas) also criticized the speed with which the House took up the bill, noting there were no subcommittee markups of the four original bills that make up the SPACE Act, as well as no hearings in this Congress regarding the space resources section of the bill. "Moving this legislation without really addressing these issues is, I believe, negligence on the part of the Congress," said Johnson.

The bill's Republican sponsors, however, defended both the bill's language and the speed at which it was considered. House Majority Leader Rep. Kevin McCarthy (R-Calif.), the bill's lead sponsor, said a draft of the original SPACE Act was provided to Democrats in October. "Unfortunately, the minority party did not come back for five months," he said.

Edwards introduced an amendment to replace the text of the SPACE Act with S. 1297, the U.S. Commercial Space Launch Competitiveness Act. That bill, approved by the Senate Commerce Committee without debate May 20, contains many of the same launch-related provisions as the House bill, but with an extension of the learning period and launch indemnification only through 2020.

Edwards argued that the House bill had a "snowball's chance" of being passed by the Senate, which is more likely to take up its own bill that has bipartisan support. "The Senate bill doesn't have everything I would like to see in a commercial space bill," she said. "However, it has a core set of provisions that I think we and the industry can support."

Republicans, though, opposed the amendment, noting that the Senate bill did not include the SPACE Act's sections on space resource utilization, commercial remote sensing, and changes to the Office of Space Commercialization. Smith added he opposed the amendment since "it would abdicate the responsibilities of the House" in developing its own version of the bill.

The House defeated the Edwards amendment on a 173–236 vote that fell almost exactly on party lines. Six other amendments, making only minor changes to the bill, passed on voice votes.