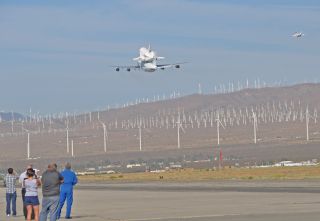 Endeavour’s last flight was watched intently by a new generation of space wizards at the Mojave Air and Space Port on Sept. 21, 2012. Engineers and technicians from The Spaceship Co., Masten, XCOR and other Mojave companies accompanied by their families watched in awe as Endeavour and its 747 carrier aircraft made two passes over runways that launch and land the next generation of space vehicles.
(Image: © Bill Deaver/Deaver-Wiggins and Associates )

“California aerospace pioneers like Virgin Galactic, SpaceX and the Spaceship Company are blazing a path to the stars with commercial space travel,” Brown said in a statement. “This bill allows commercial space-travel companies to innovate and explore without the worry of excessive liability.”

A summary overview of Assembly Bill 2243 shows that it provides qualified immunity from liability to a spaceflight entity for injuries to a space flight participant, so long as a written warning statement is provided to the participant and the injury was not the result of spaceflight entity's gross negligence or intentional acts. [Now Boarding: The Top 10 Private Spaceships]

Leading the measure that was targeted to an emerging industry in California was Assemblyman Steve Knight (R-Palmdale). Last August, the bill unanimously passed in both houses of the California State Legislature.

“California, and specifically the High Desert, has a long tradition of pioneering aviation for a century, and human spaceflight since the Apollo era, and was the site of the first private human space flight event, which resulted in the winning of the Ansari X Prize in Mojave, California, in 2004,” Knight said.

Over the past few decades, Knight added, California has lost a significant slice of its human spaceflight industry development to other states, specifying Alabama, Colorado, Florida, New Mexico and Texas. The human spaceflight business in California, he said, continues to struggle due to the poor business climate in general, and the current litigious environment.

“The history of space flight and California are inseparable,” Knight said. “Providing the commercial space industry with a competitive advantage will ensure our state maintains and possibly gains jobs in this important market.”

The bill-signing was praised by Virgin Group founder Sir Richard Branson, who called California a state that tears down barriers and cultivates innovation, from social movements like environmentalism to the start-up culture of Silicon Valley.

Branson called the bill a benefit to the teams at Virgin Galactic and The Spaceship Co. at the Mojave Air and Space Port — the construction site of the WhiteKnightTwo/SpaceShipTwo launch system.

“This legislation will ensure that California continues to be a place that looks forward … and not back,” Branson said.

For a complete look at the newlegislation, visit: http://leginfo.ca.gov/bilinfo.html and enter Assembly Bill 2243.