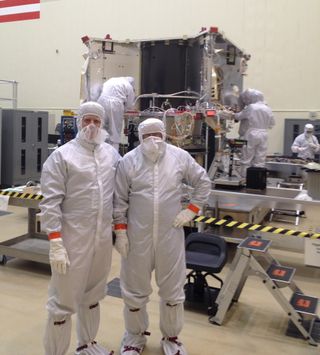 NASA’s spacecraft to an asteroid – the OSIRIS-REx mission — is being readied for a 2016 liftoff. Gary Napier, Lockheed Martin spokesman (left) and reporter Leonard David (right) stand in front of spacecraft build-up on April 6, 2015 as technicians work on the probe for launch next year.
(Image: © Leonard David)

DENVER, Colorado – A fact-filled and incredible day at Lockheed Martin on April 6, visiting ultra-clean room facilities in which NASA's OSIRIS-REx spacecraft is coming together for a September 2016 liftoff.

The Origins, Spectral Interpretation, Resource Identification, Security, Regolith Explorer (OSIRIS-REx) probe is headed for asteroid Bennu, a carbon-rich body that could hold clues to the origin of the solar system and host organic molecules that may have seeded life on Earth.

The spacecraft will collect and return samples of the asteroid, returning the specimens gathered back to Earth for detailed analysis. [NASA's OSIRIS-REx Asteroid Mission in Pictures]

Lofted spaceward next year, the probe will reach asteroid Bennu in 2018 and return a sample to Earth in 2023.

In protective garb, this reporter saw assembly, test and launch operations (ATLO) phase technicians hard at work in a critical stage of the program.

Over the next several months, spacecraft handlers will install on the OSIRIS-REx structure its many subsystems, including avionics, power, telecomm, mechanisms, thermal systems, and guidance, navigation and control.

Once the spacecraft has been fully assembled, it will undergo rigorous environmental testing this fall.

Lockheed Martin is building the spacecraft and will provide spacecraft mission operations.

Special thanks to Lockheed Martin's Gary Napier for the inside view!

Leonard David has been reporting on the space industry for more than five decades. He is former director of research for the National Commission on Space and is co-author of Buzz Aldrin's 2013 book "Mission to Mars – My Vision for Space Exploration," published by National Geographic, with a new updated paperback version to be released in May. Follow us @Spacedotcom, Facebook and Google+. Published on Space.com.