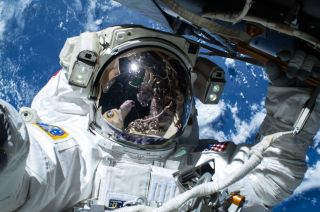 Update: The spacewalk is now complete and the astronauts are safely back on board the space station.

Two NASA astronauts are now performing a spacewalk outside the International Space Station, and people on Earth can watch the spacewalk live online.

Astronauts Barry Wilmore, commander of Expedition 42, and flight engineer Terry Virts ventured out into the vacuum of space at about 6:50 a.m. EST (1150 GMT). The spacewalk is scheduled to last approximately six-and-a-half hours. You can watch the live broadcast on Space.com or on NASA TV.

The astronauts are continuing work on the exterior of the station that will pave the way for the arrival of private space taxis. These commercial capsules will escort new crew members from Earth to the orbiting outpost.

The spacewalk is the second in a series of three that will prepare the orbiting laboratory for new docking stations that will link up with commercially built space capsules. Last year, NASA awarded contracts to Boeing and SpaceX to build these private space taxis to bring crew members and cargo to the station.[Now Boarding: The Top 10 Private Spaceships]

"We're doing a lot of reconfiguration this year," Kenneth Todd, International Space Station operations and integration manager, said at a news conference on Wednesday (Feb. 18). "We are really trying to take the station into this next phase in support of the commercial industries and providers. … It all kind of gets started here in the next couple of weeks with the EVAs."

Three spacewalks have been scheduled to prepare the station for the installation of two international docking adapters (IDAs) to the ISS, which can receive crewed commercial capsules. The IDAs will attach to the pressured mating adapters (PMAs) on the station's Harmony module. During the spacewalks, the astronauts will install cables to the IDAs for communication and data transmission.

Wilmore and Virts completed the first of those three spacewalks last Saturday (Feb. 21), and are scheduled to once again venture outside the space station this Sunday (March 1).

Last Saturday's spacewalk went off without a hitch, in 6 hours 40 minutes. The astronauts finished their tasks ahead of schedule and performed one "get ahead" task that was originally set to be completed on today's spacewalk.

Today's spacewalk will be Wilmore's third career spacewalk and Virts' second. On his first spacewalk last Saturday, Virts was a man of few words, noting only that he felt "great" and that the spacewalk was easier than working in the Neutral Buoyancy Laboratory (NBL) at Johnson Space Center — a massive swimming pool where astronauts train for work in microgravity.

NASA coverage of the spacewalk will start at 6 a.m. EST (1100 GMT). The spacewalk is expected to take approximately six-and-a-half hours. This will be the 186th spacewalk in support of space station assembly and maintenance, according to NASA.

The two astronauts will be assisted from inside the station by European Space Agency astronaut Samantha Cristoforetti.

Editor's Note: This story was updated to reflect updates in today's spacewalk.