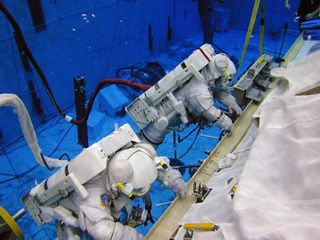 The replacement of an astronaut scheduled to make a spacewalk on NASA's next space shuttle mission and the plan for a Russian spacewalk outside the International Space Station today (Jan. 21) have put a spotlight on the physical challenges of working outside in space.

Astronaut Tim Kopra was slated to be the lead spacewalker on the shuttle Discovery's STS-133 mission, set to launch Feb. 24. After he was injured in a bicycle accident last week, NASA replaced Kopra on the crew with astronaut Steve Bowen, who will take the spacewalk instead.

Astronaut Peggy Whitson, chief of NASA's astronaut office at the Johnson Space Center in Houston, said Wednesday that finding someone to fill Kopra's role was "complicated, because it's probably one of the hardest positions to fill."

That's because taking a spacewalk isn't a mere float in the park. It's some of the hardest physical labor astronauts encounter in their jobs.

"It’s a lot of hard work on your muscles, mostly upper torso and arms and hands," NASA spokesman Kelly Humphries told SPACE.com. "You're essentially in an inflated balloon which creates resistance against your movements. A lot of the training we do is to make sure the crew members are able to operate in that pressurized environment."

And most spacewalks are more akin to marathons than sprints. Russian cosmonauts Dmitry Kondratyev and Oleg Skripochka, for instance, are expected to be outside for roughly six hours during their Friday spacewalk to install a new TV camera and do other maintenance work on the exterior of the International Space Station.

To top it all off, spacewalkers must do this arduous labor without a lunch break. They can sip from drink bags inside their helmets, but that's it.

"Crew members are notoriously ravenous when they come in from spacewalks," Humphries said.

To train for spacewalks, astronauts go through detailed practice sessions, including rehearsals in their full spacesuit gear in a giant swimming pool called the Neutral Buoyancy Laboratory (NBL) at Johnson Space Center. The floating feeling that the astronauts have while swimming is the closest approximation on Earth to weightlessness.

Astronauts spend at least seven hours in the pool for every hour they plan to spacewalk. In the NBL's 6.2 million gallons of water, NASA can place full-scale mockups of the equipment the spacewalkers will be working on during their mission.

Besides rehearsing the motions required for their upcoming tasks, astronauts must exercise and stay fit. Many like to squeeze hand-exercise balls to strengthen their grip – an important skill for spacewalking, Humphries said.

Making up for lost time

Bowen will have to do some catching up to fill Kopra's role as lead spacewalker of Discovery's mission. Kopra and mission specialist Alvin Drew were set to take two spacewalks together to upgrade the International Space Station and install spare parts on the orbiting lab's exterior.

"He's a very experienced EVAer," Whitson said. "We felt with very few additional [training] runs, he could already pick up the timeline runs that Tim  and Al had worked out together previously and be able to pull them off."