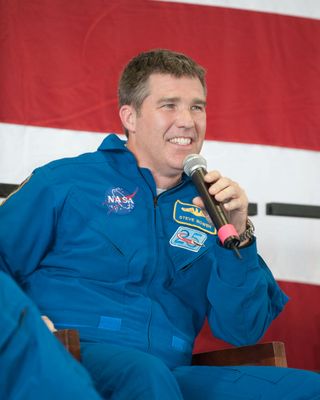 NASA has assigned a veteran spacewalker to replace injured astronaut Tim Kopra on the crew of the space shuttle Discovery, less than six weeks before the mission's launch.

Astronaut Steve Bowen, a veteran of five spacewalks and two spaceflights, will replace Kopra, who was injured in a bicycle accident Jan. 15.

"Tim is doing fine and expects a full recovery; however, he will not be able to support the launch window next month," Peggy Whitson, chief of the Astronaut Office at NASA's Johnson Space Center in Houston, said today (Jan. 19). "If for some unanticipated reason STS-133 slips significantly, it is possible that Tim could rejoin the crew."

Discovery is currently slated to launch Feb. 24 after months of delays due to fuel tank problems. The crew change should not affect the mission's target launch date, NASA officials said.

"This is a unique situation for us," Bill Gerstenmaier, NASA's space operations chief, told reporters today (Jan. 19). "I think we've got good plans in place. The teams have done a tremendous job of getting prepared."

Kopra's accident was the latest setback in a mission that has been delayed since early November by cracks found on the shuttle's massive external fuel tank.

Kopra, 47, was to be the lead spacewalker for Discovery's STS-133 mission, which includes two spacewalks to upgrade the International Space Station and install spare parts on the orbiting lab's exterior.

Few details on Kopra's condition were revealed due to medical privacy issues, but Whitson did say that he has expressed a strong interest in remaining involved with Bowen's training and the STS-133 mission itself. Should the flight be delayed beyond the February window, Whitson said there is a chance that Kopra could potentially be reinstated to his position as the flight's spacewalking chief.

For the time being, however, Kopra will remain on the sidelines.

"When you dedicate your life to something like this, it's definitely a setback," Whitson said. "Our guys are extremely professional and understand the big picture, overall risk and the requirement to the mission. As logical as all those arguments might be, I'm still sure that [Kopra]'s disappointed."

Bowen will have only two chances to practice in NASA's giant spacewalk training swimming pool, called the Neutral Buoyancy Lab (NBL) at the Johnson Space Center. Typically for each spacewalk, crewmembers practice the procedures in the NBL six to eight times, Whitson said.

"It's definitely a challenge," she said. "We've replaced crewmembers on the shuttle eight previous times – this is the closest in the shuttle history to the launch date. I think the reason we have pulled this off without having dedicated backups like they did in the Apollo era has a lot to do with how we've modified our training since the inception of ISS to include much more skills-based training, rather than tasks-based training."

Whitson added that Bowen, as a veteran spacewalker, will be able to successfully tackle the challenges in the short timeframe.

"Steve is an ideal candidate, and we have complete confidence he'll contribute to a fully successful STS-133 mission," Whitson said. "He has performed five prior spacewalks. That extensive experience, coupled with some adjustments to the spread of duties among the crew, will allow for all mission objectives to be accomplished as originally planned in the current launch window."

Discovery's 39th and final mission to the International Space Station will deliver a storage room, critical space components for the station and a humanoid robot helper to assist the crew of the orbiting outpost.

Yet despite his disappointment, Kopra was able to find some humor in the situation, Whitson said. "When I went to his house to talk about this, his cat has a little hoop around her head to keep her from licking herself, and he said 'the cat's in the penalty box, and so am I, for getting hurt before the flight.'"