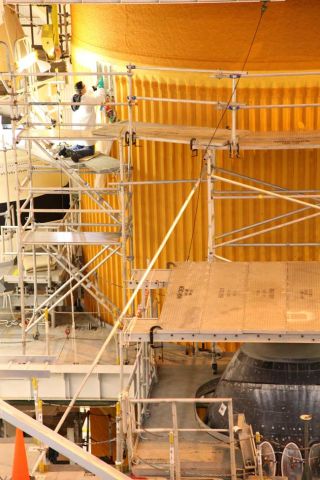 NASA is hoping to launch the space shuttle Discovery on its final voyage no earlier than Feb. 24, after months of delays due to cracked fuel tank supports, the space agency announced Tuesday (Jan. 11).

Top space shuttle officials announced the new targeted launch date, stating they were finally able to identify the root cause of the cracks, after reviewing ongoing work to repair support beams, known as stringers, on Discovery's external fuel tank.

"It's been two months of very vigorous activity," said John Shannon, NASA's shuttle program manager. "It took a lot of investigation. I'm very confident that we have this figured out, and we have a fix that is easy to implement. That was the good news this past week."

Based on their analyses, the program managers say the cracks were caused by a combination of factors: a batch of structurally weaker stringer material, and stress from the tank's assembly stage.

To fix the problem, technicians at NASA's Kennedy Space Center in Cape Canaveral, Fla., have been adding metal strips to the stringers in the tank's so-called intertank region. These metal reinforcements will add structural support in the regions of the tank that undergo the most stress during the shuttle's launch and ascent into orbit – providing up to four times the load capability, Shannon said.

In total, engineers are reinforcing 94 of the tank's support beams. NASA officials have said that the extra metal will not add significant weight to the tank, with Shannon estimating that the reinforcements would combine for about five pounds.

"We're going to fly with a lot of confidence in this tank," Shannon said.

Discovery's final spaceflight has been delayed since early November due to these cracked fuel tank support beams. The new targeted launch is three days earlier than previous estimates, which cited a window that would open on Feb. 27 and close on March 6. The orbiter's launch will now occur no earlier than 4:50 p.m. EST (2150 UT) on Feb. 24.

Completion of the stringer modifications is currently estimated to be around Jan. 23, NASA spokesman Allard Beutel told SPACE.com. Discovery would then be rolled out to its seaside launch pad from the Vehicle Assembly Building sometime in the first week of February.

In the meantime, the astronauts who will fly aboard Discovery on its 39th and final mission will spend the extra time practicing contingency abort scenarios at the Johnson Space Center in Houston, the training base for shuttle crews, and the home of the Mission Control Center.

Discovery's last mission will deliver critical spare parts to the station, as well as a storage room module and a humanoid robot to assist the crew of the orbiting laboratory.

The flight is one of the last two scheduled missions as NASA prepares to retire its three-orbiter fleet in 2011. NASA also plans to fly a third flight around mid-year pending final funding authorization from Congress.

In addition to Discovery's flight, NASA's shuttle Endeavour is slated to launch in early April to deliver an astrophysics experiment to the International Space Station. That mission is currently commanded by astronaut Mark Kelly, whose wife – Rep. Gabrielle Giffords – is recovering from a gunshot wound to the head after a brazen Jan. 8 attack in Tucson, Ariz., that killed six people and wounded 14 others, including Giffords.

In a media briefing held Tuesday, NASA officials said they would not discuss Kelly's plans for the April shuttle mission out of respect for the astronaut, his family and the other victims.