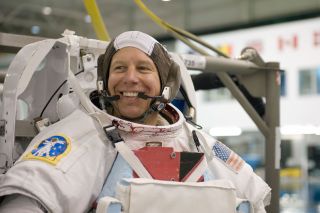 A weekend bike accident that injured a NASA astronaut just weeks before his planned launch into space on the shuttle Discovery has thrown a new wrench into an already much-delayed mission.

The accident – which occurred Saturday (Jan. 15) – involved veteran astronaut Tim Kopra, who is training to serve as the chief spacewalker for Discovery's final space shuttle mission, NASA officials said. The spaceflight is slated to launch Feb. 24.

"Mission Specialist Tim Kopra was injured Saturday in a bicycle accident, but he will be OK. There could be an impact to his duties for shuttle Discovery's STS-133 mission to the International Space Station. That possibility still is being evaluated," NASA officials said in a written statement.

Kopra, 47, is the lead spacewalker for Discovery's STS-133 mission, which includes two spacewalks to upgrade the International Space Station and install spare hardware on the orbiting lab's exterior. He is a retired U.S. Army colonel.

He is one of six astronauts on the STS-133 mission, the last planned flight of space shuttle Discovery before it is retired along with the rest of NASA's three-orbiter shuttle fleet later this year.

Discovery was originally planned to launch last November, but has been delayed repeatedly due to cracks discovered on the shuttle's huge orange external fuel tank.

"Astronauts have sustained injuries while training for flight before -- in some cases, they have been able to heal in time to fly, and in others, a replacement had to be assigned," said space history and artifacts expert Robert Pearlman, who founded the website collectSPACE.com – a SPACE.com partner.

For example, in 2002 astronaut Christopher "Gus" Loria had been training as pilot for space shuttle Endeavour's STS-113 mission when he sustained a severe back injury, Pearlman said. Three months before the mission launched, NASA swapped in astronaut Paul Lockhart to take his place.

"Ultimately, Colonel Loria's injuries kept him permanently grounded and he requested a transfer back to the Marine Corps, leaving NASA in 2005," Pearlman said.

And in 1997, astronaut Don Thomas was training to fly as a mission specialist on shuttle Columbia's STS-83 mission when he broke his ankle while exercising, just four months before his planned launch. Though NASA assigned another astronaut to train as his backup, Thomas healed in time and he flew as planned in April 1997, Pearlman said.