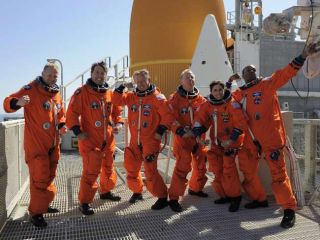 At NASA's Kennedy Space Center in Florida, the STS-133 crew takes a break from a simulated launch countdown to ham it up for a group photo on the 195-foot level of Launch Pad 39A. From left are, pilot Eric Boe, mission specialist Michael Barratt, commander Steve Lindsey, and mission specialists Tim Kopra, Nicole Stott, and Alvin Drew.
(Image: © NASA/Kim Shiflett)

CAPE CANAVERAL, Fla. — A tight-knit crew of six veteran astronauts are gearing up to ride the space shuttle Discovery on her last voyage beyond Earth this week.

The spaceflyers are due to launch on Discovery on Wednesday (Nov. 3) at 3:52 p.m. EDT (1952 GMT), from Kennedy Space Center in Cape Canaveral, Fla.

The five men and one woman slated to lift off on the shuttle are not just crewmates, but friends as well. In fact, five of the six crewmembers were selected into the same astronaut training class. They are flying on the final mission for shuttle Discovery — STS-133 — as NASA prepares to retire its shuttle fleet next year.

But just who are the people behind the orange spacesuits? Here's a glimpse at each member of the last crew of space shuttle Discovery:

Steve Lindsey, 50, is the commander of the mission. A native of Temple City, Calif., Lindsey is a retired Colonel in the United States Air Force. He was selected as an astronaut candidate by NASA in 1995, and has made four spaceflights, two of those on shuttle Discovery.

"Discovery is a workhorse — fleet leader in number of flights," Lindsey said in a preflight briefing. "It's a privilege to be able to fly the last flight of Discovery." [Gallery: Building Space Shuttle Discovery]

The strong but soft-spoken Lindsey said he is excited to lead his fellow crewmembers on the 11-day expedition to the International Space Station.

"Personally, I'm really excited to be flying with this crew," Lindsey said. "They're a fantastic group of people to fly with. Somebody once told me, you'll find as you get more experience, it's less about what you do on a mission, and more about who you get to fly it with. And I think that's really true in this case."

Lindsey is married and has three children.

Eric Boe will serve as the pilot of STS-133, Discovery's 39th flight. The 46-year old native of Atlanta, Ga. is a colonel in the United States Air Force, and was selected to join NASA as a pilot in July 2000.

Boe completed his first spaceflight on NASA's STS-126 mission, on the space shuttle Endeavour. At a preflight briefing, Boe reflected on the significance of being part of one of the final flights of NASA's space shuttle program.

"I think all of us are happy to be on another flight," Boe said. "It's a little bittersweet when something comes to an end, but it's a privilege to be able to fly the vehicle."

For the upcoming mission, Boe said he is most looking forward to gaining new experiences and working as a team with his other crewmembers.

"When you're up there, things go pretty quick," he said. "I think I'll have a little more time to look around and pay attention to the small details. The biggest overall thing I hope to get out of this is to really absorb some of the small details I might have missed on the first flight."

Boe is married and has two children.

Discovery's Mission Specialist 1 is Alvin Drew, a recently retired colonel in the U.S. Air Force. During the crew's stay at the space station, Drew will participate in the mission's two spacewalks.

In addition to commemorating the legacy of the space shuttle Discovery, Drew will have another important milestone to celebrate while in space — on Nov. 5, he will turn 48-years-old.

Drew, who was born in Washington, D.C., was selected as a mission specialist by NASA in July 2000, and made his first spaceflight aboard the shuttle Endeavour for STS-118 in 2007. Having grown up dreaming of becoming an astronaut, Drew admitted that his spaceflying career seems almost surreal at times.

"[Becoming an astronaut] was one of the things that was in the back of my mind during my Air Force career, but nothing that I really took that seriously," he explained. "I think depending your career on becoming an astronaut is like planning your pension around winning the lottery. It's something that you can go pursue, but you should have a 'Plan B' in place. I did everything to stack the deck in my favor, but never really expected it would happen."

Drew's spacewalks on Discovery's STS-133 flight will be the first of his career, and he said he's proud to contribute to the future of the orbiting laboratory.

"Hopefully I can come back in 2020 and see the station working and think, I had a small part in keeping it going this long," he said.

U.S. Army Col. Tim Kopra will serve as a mission specialist for Discovery's STS-133 spaceflight. The 47-year old native of Austin, Tex., is Discovery's Mission Specialist 2 and will lead the two spacewalks outside the station during the mission.

Kopra was selected to become an astronaut in July 2000 and completed his first spaceflight in 2009. He launched with the STS-127 crew aboard the space shuttle Endeavour in 2009 and logged two months aboard the space station. During his stay, Kopra performed one spacewalk and completed robotic operations and numerous science experiments.

For the upcoming mission, Kopra is especially excited to be reunited with so many of his classmates from the astronaut corps.

"What's really special about this flight is the fact that all the Class of 2000 folks are on it," he said. "We started together, and here it is 10 years later and now we're going to have this opportunity — all of us with some spaceflight experience, and being able to share that together. We started out knowing very little to nothing about spaceflight, and all of us have grown in different ways over the years."

As NASA's space shuttle program draws to a close, Kopra and his crewmates recognize the contributions of the many people across the nation that work tirelessly to ensure the safety of the astronauts and the success of the mission.

"We really feel honored to be doing what we're doing," Kopra said. "The vehicle is a representation of a lot of hard work and a group of people who have been working toward a safe flight every single time."

Kopra is married and has two children.

Nicole Stott is the Mission Specialist 4 for Discovery's upcoming flight. She began working at NASA's Kennedy Space Center in 1988 as an operations engineer in the Orbiter Processing Facility.

Stott, 47, was selected for astronaut training in July 2000 and launched on  her first spaceflight to the International Space Station in 2009, also aboard Discovery. The mission also marked Stott's first long-duration tour of duty on the orbiting station. While living and working on the space station, Stott completed one spacewalk and spent a total of 91 days in space.

Stott's second journey on Discovery will also be the orbiter's last, and in a preflight briefing, she spoke about the prolific shuttle's storied career.

"It's a historic thing that we have such a special vehicle to fly," she said. "The hope, in addition to having a successful mission, is that we'll be celebrating the real significance of the vehicle itself. We have to look at this as a celebration of just how wonderful Discovery has performed."

Additionally, having grown up in Clearwater, Fla., Stott knows firsthand the impact and enduring legacy that NASA's space shuttle program has had on the country.

"There's nothing negative that you can say about it," Stott said. "There are only positives and encouraging things that have come from this program."

Stott is married and has one child.