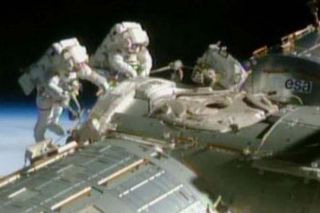 Two NASA astronauts are safely back inside the International Space Station today (Feb. 20) after successfully completing the first of three scheduled spacewalks planned to prep the outpost for the arrivals of commercial spacecraft carrying astronauts in the coming years.

Barry "Butch" Wilmore, commander of Expedition 42, and flight engineer Terry Virts successfully completed three scheduled tasks and an extra "get ahead" task during today's spacewalk, with no problems. The two astronauts ventured out of the station at about 8:00 a.m. EST (1300 GMT). They reentered the orbiting outpost just after 2:30 p.m. EST (1930 GMT). Wilmore and Virts are scheduled to perform two more spacewalks in the next eight days.

Today's excursion was Virt's first career spacewalk, and Wilmore's second. Just over an hour into the spacewalk Virts noted to Wilmore, "I feel great man, I feel good! Definitely easier than the pool." (Virts is referring to the Neutral Buoyancy Laboratory (NBL) at Johnson Space Center: a massive swimming pool where astronauts train for work in microgravity). [Quiz: How Well Do You Know the International Space Station?]

The spacewalk was predicted to take around six-and-a-half hours. Five hours after the start of the spacewalk, mission control informed the astronauts that they were approximately 30 minutes ahead of schedule. The astronauts completed one "get ahead" task, which was originally scheduled to be performed during a spacewalk on Feb. 25.

The two NASA astronauts were assisted from inside the station by European Space Agency astronaut Samantha Cristoforetti. In the early morning hours, Cristoforetti helped Wilmore and Virts get into their spacesuits and prepare for the walk.

During today's spacewalk, Wilmore and Virts were given various tasks aimed at preparing the space station for the installation of two international docking adapters that will allow the station to rendezvous with future private space taxis. Last year, NASA selected Space X's Dragon capsule and Boeing's CST-100 to bring future crews to the orbiting outpost.

In a news conference on Wednesday (Feb. 18), NASA official Karina Eversley described the first task that Wilmore and Virts would be performing today as "the most complicated cable routing task" ever performed in a spacewalk on the International Space Station.

Because so much of their work on today's excursion involved laying and attaching cables, NASA's space station blog dubbed the two astronauts "the cable guys."

The docking adapters for the commercial crewed spacecraft will be launched to the station on two different SpaceX Dragon cargo capsules later this year. Once the private space taxis are in operation, they will allow the station's onboard crew to grow from six members to seven.

Upon returning to the station, Wilmore said, "We've been talking for years about updating the capabilities of the International Space Station, and today we took a giant leap in that direction."

Wilmore and Virts are scheduled to perform additional spacewalks on Feb. 25 and Mar. 1, both starting at 7:10 a.m. EST (1210 GMT). Those spacewalks will also be focused on preparing the station for the new docking adapters.