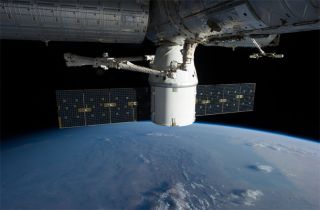 The upcoming modifications to the International Space Station will be carried out by NASA to reconfigure the docking ports for Boeing’s CST-100 and SpaceX’s Dragon capsules, the two new commercial spacecraft capable of delivering cargo and crew to the orbiting outpost.
(Image: © NASA)

The reconfiguration, which is expected to be finished before the end of the year, is the first major overhaul of the station, which was completed in 2011 after more than a decade of space shuttle-based assembly missions.

With station construction finished, NASA retired its fleet of space shuttles and turned to Russia for crew ferry flights, a service that costs the United States more than $70 million per person. [Building the International Space Station (Photos)]

NASA, which hopes to end its reliance on Russia before the end of 2017, awarded contracts to Boeing and Space Exploration Technologies, or SpaceX, to develop, test and fly capsules that can taxi astronauts to and from the station, which orbits about 260 miles above Earth. The agency expects to pay its U.S. operators an average $58 million per person for transportation to and from the station, said Kathy Lueders, manager of NASA’s commercial crew program.

Reconfiguring the station will open docking ports for Boeing's CST-100 and SpaceX's Dragon capsules. One berthing slip will be at the front end of the Harmony connecting node, where the space shuttles used to dock. The other will be on Harmony’s zenith, or up-facing, port.

The visiting ships also will need docking targets, communications systems and other gear, all of which will be installed during seven spacewalks planned for this year, said station operations manager Kenneth Todd.

The spacewalks kick off on Saturday when station commander Barry "Butch" Wilmore and flight engineer Terry Virts make the first of three outings to prepare cables and communications gear. They are scheduled for two more outings on Wednesday and on March 1.

Two new International Docking Adapters, which is what the space taxis will attach to, are due to arrive aboard SpaceX Dragon cargo flights later this year, but several pieces of the station need to be rearranged before then.

The biggest change will be the relocation of the Leonardo multipurpose module from the Unity to the Tranquility connection nodes, an operation that will be tackled robotically via ground control, said space station program manager Mike Suffredini.

"This is quite a bit of work," Suffredini said. "Our plan has always been to have a docking capability in place and operational by the end of 2015 and we’re on track to do that."

NASA plans to fly four astronauts at a time on the new vehicles, one more than the number currently flown aboard Russian Soyuz capsules. That will allow the station's live-aboard crew to expand from six to seven.

SpaceX president Gwynne Shotwell said the company’s upgraded Dragon V2 passenger ship should be ready for an unmanned debut test flight to the station in late 2016 and a crewed test flight in early 2017.

Boeing's plan is to make an unmanned CST-100 test flight to the station in April 2017, followed by a crewed flight in July 2017, said company vice president John Elbon.