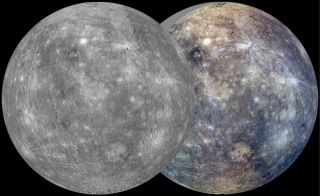 During its first Mercury solar day (which is about 176 Earth days long) in orbit, NASA's MESSENGER spacecraft imaged nearly the entire surface of Mercury to generate a global monochrome map at 250 meters per pixel resolution and a 1 kilometer per pixel resolution color map.
(Image: © NASA/JHU APL/CIW)

Mercury has an oddball orbit — it takes longer for it to rotate on its axis and complete a day than it takes to orbit the sun and complete a year. Now, researchers suggest photosynthesis could take place on an alien planet with a similarly bizarre orbit, potentially helping support complex life.

However, the scientists noted that the threat of prolonged periods of darkness and cold on these planets would present significant challenges to alien life, and could even potentially freeze their atmospheres. They detailed their findings in the International Journal of Astrobiology.

Astronomers have discovered more than 1,700 alien planets in the past two decades, raising the hope that at least some might be home to extraterrestrial life. Scientists mostly focus the search for alien life on exoplanets in the habitable zones of stars. These are regions where worlds would be warm enough to have liquid water on their surfaces, a potential boon to life. [10 Exoplanets That Could Host Alien Life]

Although many exoplanets are potentially habitable, they may differ from Earth significantly in one or more ways. For instance, habitable planets around dim red dwarf stars orbit much closer than Earth does to the sun, sometimes even closer than Mercury's distance.

Red dwarfs are of interest as possible habitats for life because they are the most common stars in the universe — if life can exist around red dwarfs, then life might be very common across the cosmos. Recent findings from NASA's Kepler Space Observatory suggest that at least half of all red dwarfs host rocky planets that are one-half to four times the mass of Earth.

Since a planet in the habitable zone of a red dwarf orbits very near its star, it experiences much stronger gravitational tidal forces than Earth does from the sun, which slows the rate at which those worlds spin. The most likely result of this slowdown is that the planet enters what is technically called a 1:1 spin orbit resonance, completing one rotation on its axis every time it completes one orbit around its star.

This rate of rotation means that one side of that planet will always face toward its star, while the other side will permanently face away, just as the moon always shows the same side to Earth. One recent study suggests that such "tidally locked" planets may develop strange lobster-shaped oceans basking in the warmth of their stars on their daysides, while the nightsides of such worlds are mostly covered in an icy shell.

However, if a habitable red dwarf planet has a very eccentric orbit — that is, oval-shaped — it could develop what is called a 3:2 spin orbit resonance, meaning that it rotates three times for every two orbits around its star. Mercury has such an unusual orbit, which can lead to strange phenomena. For instance, at certain times on Mercury, an observer could see the sun rise about halfway and then reverse its course and set, all during the course of one mercurial day. Mercury itself is not habitable, since it lacks an atmosphere and experiences temperatures ranging from 212 to 1,292 degrees Fahrenheit (100 to 700 degrees Celsius). [Latest Photos of Mercury from NASA's MESSENGER Probe]

“If the sun were less intense, Mercury would be within the habitable zone, and therefore life would have to adapt to strange light cycles," said lead study author Sarah Brown, an astrobiologist at the United Kingdom Center for Astrobiology in Edinburgh, Scotland.

To see what photosynthetic life might exist on a habitable red dwarf planet with an orbit similar to Mercury's, scientists calculated the amount of light that reached all points on its surface. Their model involved a planet the same mass and diameter as the Earth with a similar atmosphere and amount of water on its surface. The red dwarf star was 30 percent the sun's mass and 1 percent as luminous, giving it a temperature of about 5,840 degrees Fahrenheit (3,225 degrees Celsius) and a habitable zone extending from 10 to 20 percent of an astronomical unit (AU) from the star. (One AU is the average distance between Earth and the sun.)

The scientists found that the amount of light the surface of these planets received concentrated on certain bright spots. Surprisingly, the amount of light these planets receive does not just vary over latitude as it does on Earth, where more light reaches equatorial regions than polar regions, but also varies over longitude. Were photosynthetic life to exist on worlds with these types of orbits, "one would expect to find niches that depend on longitude and latitude, rather than just latitude," said study co-author Alexander Mead, a cosmologist at the Royal Observatory, Edinburgh, in Scotland.

The research team found these planets could experience nights that last for months. This could pose major problems for photosynthetic life, which depends on light. Still, the scientists noted that many plants can store enough energy to last through 180 days of darkness. Moreover, some photosynthetic microbes spend up to decades dormant in the dark, while others are mixotrophic, which means they can survive on photosynthesis when light is abundant and switch to devouring food when light is absent.

Another problem these long spans of darkness pose for life is the cold, which could freeze the atmospheres of these planets. Still, the investigators note that heat can flow from the dayside of such a planet to its nightside and prevent this freezing if that planet's atmosphere is sufficiently dense and can trap infrared light from the planet's star. This heat flow could lead to very strong winds, but this does not necessarily make the world uninhabitable, they added. [The Strangest Alien Planets]

"Life having to cope with such tidally driven resonances could be common in the universe," Mead said. "It changes one's perception of what habitable planets in the universe would be like. There are many possibilities that are very un-Earth-like."

However, the researchers noted that the strength of a world's magnetic field depends in large part on how quickly it spins, which suggests that planets with orbits like Mercury's might have relatively weak magnetic fields. This could mean these worlds are not as good at deflecting harmful electrically charged particles streaming from their red dwarfs and other stars that can damage organisms and strip off the atmospheres of these planets.

The investigators suggested that dense atmospheres could help keep such planets habitable in the face of radiation from space. They added that life might be confined to certain spots on the surfaces of those planets that experience relatively safe levels of radiation.

Are astronomers capable of detecting habitable planets with a 3:2 spin orbit resonance?

"Measuring the day length of extrasolar planets is enormously difficult, and the first day length measurements for any extrasolar planets were only published this year," Mead said. "Such a measurement for the planets we discuss would be much more difficult due to the fact that they are small, rocky planets around faint stars. This means that we are probably a long way from measuring the spin rates of such habitable worlds."