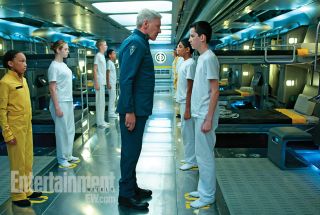 The forthcoming film adaptation of Ender's Game is coming to Comic-Con International in San Diego, but it looks like Orson Scott Card, the controversial author of the original novel, is not.

Summit Entertainment on Thursday announced their promotional plans for the movie at next month's event, which includes a Hall H panel on Thursday, July 18. Billed as appearing are producer Bob Orci, director Gavin Hood, and cast members Harrison Ford, Asa Butterfield, Hailee Steinfeld and Abigail Breslin — with no mention of Card, the subject of recent criticism within the comic book industry due to his anti-gay rights statements.

The press release — which also reveals an "Exclusive Fan Experience" at the nearby Hilton Gaslamp and a presence at Summit's booth on the convention floor — mentions Card only once, in the final paragraph, listing the film's producers.

Card has a long history of making his stance against gay marriage publicly clear; in 2009, he joined the National Organization for Marriage's board of directors, which, according to its site, was "Founded in 2007 in response to the growing need for an organized opposition to same-sex marriage in state legislatures."

Earlier this year, Card attracted a high amount of scrutiny when DC announced that he'd be co-writing a story for their digital-first Adventures of Superman anthology, leading to initial artist Chris Sprouse leaving the series and the story being taken off the schedule. No release date or replacement artist has been announced. He's also written comics for Marvel and IDW in the past.

In further Ender's Game promotion, three propaganda-style posters have been released, reflecting the world of the film. You can see the amazing Ender’s Game posters on Newsarama, SPACE.com’s sister site.