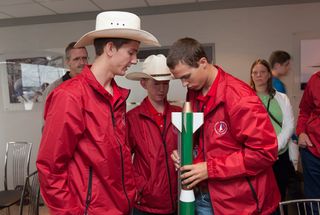 Team USA prepares its rocket before the competition.
(Image: © Raytheon)

With a delicate payload of an uncooked egg, the students' rocket launched for its winning flight at Le Bourget Airport in Paris on June 21, docking the fewest penalties of the three teams.

The gold medalists were Mark Janecka, 13, his brother Matthew, 17, and their teammate Daniel Kelton, 16, of the Georgetown, Texas, 4-H rocketry club. They advanced to the international competition after winning the Team America Rocketry Challenge (TARC) and were pit against the winners of similar contests: Britain's UKAYRoC and the French Rocketry Challenge.

The international challenge at the Paris Air Show required teams to launch a rocket exactly 750 feet (228 meters) in the air within a narrow 48- to 50-second flight window, returning the horizontally-placed raw egg to the ground intact by parachute. The teams racked up penalties for each foot off the target altitude and each second off the target time.

"It was short — but it worked, apparently," Kelton said in a statement from Raytheon, a Massachusetts-based defense and aerospace company that sponsored the winning team.  Kelton  added that the longer launch rail used in international competition slowed the rocket's ascent.

"And the rain, especially, didn't help anything," the Texas student said. "It makes the air a lot denser, and the rocket gets wet."

The competition is intended to encourage middle school and high school students to get involved in science, technology, engineering and math (STEM). The contest is organized and sponsored by the Aerospace Industries Association of America and their British and French counterparts: ADS and and Groupement des Industries Francaises Aeronautiques et Spatiales.