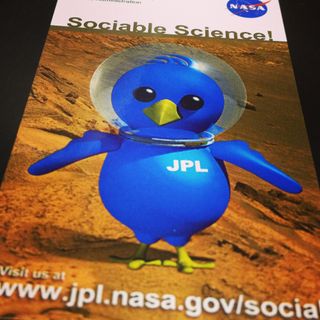 Austin, TEXAS —The Mars Rover Curiosity has become a social media star — with a huge following on Facebook, Twitter and even Foursquare, where she logged the first interplanetary check-in and is close to earning the mayor badge for Mars. How can a six-wheeled robot win so many loyal fans? She's the product of a talented team at NASA's Jet Propulsion Laboratory (JPL). (Yes, Curiosity is a "she," according to the women who run NASA's social media presence.)

Her ascent to social media stardom was won by her dramatic descent onto the Red Planet.

Curiosity's social media team came to South by Southwest in Austin, Texas, to tell how they make Curiosity a household name.

Curiosity wasn't the first rover to use social media. It all started in 2008, when Mars Phoenix posted its first "selfie" — a photograph taken by its own camera. It wasn't long before @MarsPhoenix became the fifth most popular account on Twitter. (Back in the day, that meant 38,000 followers.)

Veronica McGregor, head of the JPL newsroom, said she'd planned to livetweet the landing and then stop. But people on Twitter started asking questions, and the questions didn't stop.

"The response on Twitter redefined everything we do in communication," McGregor said. She didn't want to wait for the landing to introduce Curiosity to space enthusiasts and asked to install a camera that would live-stream the engineers at work in the cleanroom.

"The mission team was dead set against it," she said. Five months later, the camera, which posted a live feed to Ustream, was approved.

For nine months, McGregor and her partners chatted with viewers on Ustream for two hours every day.

"Turned out that the guys in the bunny suits [engineers] loved it," she said. "Pretty soon, they had set up the stream so they could wave to the camera when people made requests in the online chat window."

The JPL team also wanted people to understand just how remarkable a successful landing would be, come Aug. 5, 2012. Filmmaker John Beck was given 30 days to create a video to simulate the complex landing. Instead of taking a traditional route — one that would reassure viewers that Curiosity was bound to be successful in her landing — Beck took a different approach.

"We wanted people to know it's hard and it's scary," Beck said. "This wasn't 'Mission Slightly Do-able,' this was 'Mission Impossible.'"

He attributed the video's success to showing the mission's vulnerability — "if we fail, we die."

Millions of viewers watched the landing with fear instilled from watching Beck's "7 Minutes of Terror," but they weren't the only ones affected by the film.

Joining the NASA panel was Bobak Ferdowsi, also known as Mohawk Guy, the JPL engineer who became an overnight celebrity himself, after social media sites exploded with references to his hairdo.

"I wasn't scared about the landing until I saw the video," Ferdowsi said.

The landing was made safely. Upon landing, Curiosity tweeted, "Gale Crater, I am in you."

However, McGregor and her team were prepared for an "anomaly," NASA's tactful expression for a crash. Simply put, no tweets would be necessary within the fiction of Curiosity's self-tweeting.

"If she just crashed and burned, she couldn't talk anymore," McGregor said. "Eventually, we would tweet an update in brackets from mission control."