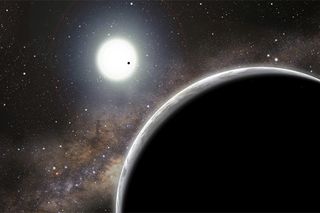 17 percent of the stars surveyed by NASA's Kepler space telescope have Earth-sized worlds in orbit, underlining the preponderance of small exoplanets in our galaxy.
(Image: © David A. Aguilar (CfA))

When it comes to life across the cosmos, the universe might just be an "awful waste of space" after all.

A new theory presented at a conference this week would confirm the worry of Ellie Arroway, Jodie Foster's character in the film "Contact," that life might not exist on other worlds.

Some scientists think that just because exoplanets could have habitable environments, that does not mean that life evolved there.

"The pervasive nature of life on Earth is leading us to make this assumption," Charles Cockell, the director of the U.K. Center for Astrobiology at the University of Edinburgh, said in a statement."On our planet, carbon leaches into most habitat space and provides energy for microorganisms to live. There are only a few vacant habitats that may persist for any length of time on Earth, but we cannot assume that this is the case on other planets."

Cockell's hypothesis states that, although habitable alien planets might abound in solar systems around the universe, it does not mean these locales harbor extraterrestrial life.

"It is dangerous to assume life is common across the universe. It encourages people to think that not finding signs of life is a 'failure,' when in fact it would tell us a lot about the origins of life," added Cockell.

It is also possible that scientists will not be able to detect alien signs of life, even if it exists, Cockell said. Life might be markedly dissimilar from planet to planet, making it unlikely that astronomers on Earth will see recognizable signatures of life. But not all hope is lost.

"Professor Cockell explains that in coming decades, increasingly powerful telescopes and developments in spectroscopy may allow us to look for the signals of life on planets beyond our solar system," officials from the Royal Society, the United Kingdom's national academy of science, said in a statement."However, regardless of this, our view is still going to be heavily influenced by our knowledge of life on Earth."

Cockell presented his theory at a conference sponsored by the Royal Society.