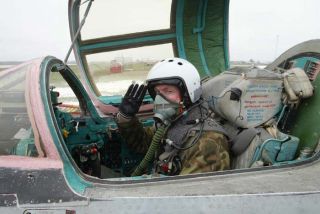 Greg Olsen sits in the cockpit of a Russian jet.
(Image: © Space Adventures)

An American entrepreneurwith aspirations of reaching the International Space Station (ISS) has onceagain begun training for a tourist trip to the orbital facility.

A specific launch date hasnot been announced, but Olsen had originally hoped to launch toward the ISSalongside the Expedition 11 crew in April 2005. Italian astronaut RobertoVittori, of the European Space Agency, filled that open seat under an agreementwith Russia'sFederal Space Agency and returned to Earth eight days later. The next mannedSoyuz flight will carry Expedition 12 to the ISS is currently set for Sept. 27.

Olsen is slated to be thethird paying space tourist to the ISS following the successful flights ofDennis Tito and Mark Shuttleworth in 2001 and 2002, respectively.  Thespaceflights of both Tito and Shuttleworth were also brokered by Arlington,Virginia-based Space Adventures.

Olsen originally began trainingfor his ISS spaceflight in April 2004, but cut short his preparations when anundisclosed medical condition disqualified him for launch.

"He has remained socommitted to the program," Tearne said of Olsen.

In an earlier interviewOlson told SPACE.com that he plans to pay about $20 million for thespaceflight, which would launch aboard a Soyuz spacecraft and include eightdays in orbit, six of them aboard the ISS. The potential space tourist alsostated his intent to conduct optics experiments with infrared cameras and studycrystal growth while in orbit.